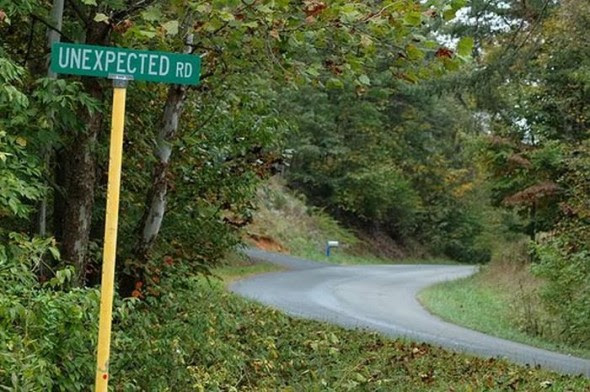 SIX WORD FRIDAY
http://melissacamarawilkins.com/blog/2011/08/19/six-word-fridays-unexpected/
Six letters, six words, six (main) lines
EXPECT!
(An Acrostic)
Expect the unexpected along the way!
X may follow Y another day!
Possibilities are everywhere, left and right;
Exceptions multiply with all their might.
Curiosities pop up in unexpected places
Try to cover all your bases
*
P.S.
My husband bought an old MG
Yesterday, and it was very unexpectedly!
*
Another shortening of the word for my own purposes! But the two extra lines are quite true!
*

YIPPEE!
The Retirement Village was all agog! A new man had arrived!
And, since a single man was rare, the ladies were deprived.
Cynthia couldn't contain herself; she rushed to the gentleman's side
Quickly she asked to know his name which was, incidentally, Clyde.
'Where have you moved from?' Cynthia said, her cheeks a pretty pink.
'Well' said Clyde 'Just yesterday they let me out of clink.'
'What were you there for?' Cynthia said, looking quite wide-eyed.
'Sadly, I was in prison because my third wife died.'
'Oh, how sad!' said Cynthia, drawing-in her breath;
'And how......?' And he replied 'I strangled her to death.'
'Then what about your second wife?' 'I shot her with a gun;
I simply found her conversation wasn't too much fun'.
' It's all so sad' said Cynthia. 'What about the third?'
'I pushed her off a balcony; she died without a word'.
Suddenly Cynthia felt quite warm, in fact all of a tingle.
And she shouted over to her friend
'Yoohoo, Beatie! He's single!'
*
Posted by Rinkly Rimes at 11:46 AM

I'm so pleased that Rinkly Rimes is 'up and running' again.
We certainly missed you for those three days last week !
..........and a new classic car in the family as well. !!!
What will happen to your lovely green Triumph, seen 'On Parade' in your picture yesterday ?

i love your taken on this
and happy to read your words!

Expect the unexpected-- and enjoy it!
A new car seems like an
enjoyable kind of unexpected. Oh my!
:)