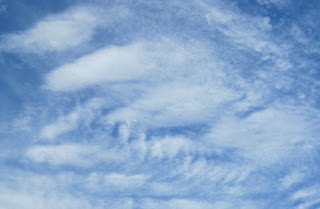 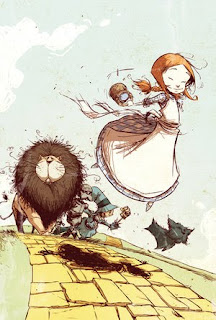 ALTERNATIVE ROUTE
I chanced upon this illustration
While surfing the net one day
And it caused my mind to wander
In it's normal unstructured way.
It's clear that it's a 'Yellow Brick Road'
And the girl must be Dorothy
And surely that's the Lion
And the Tin Man I can see.
So it illustrates 'The Wizard of Oz'.
Why then should it give me pause?
Why should I feel that something's wrong?
I think it must be because
They aren't the characters that we know,
The ones from the silver screen,
The version with Judy Garland,
Which most of us have seen.
Certain images are fixed
By time and repetition
Till, now, we feel we shouldn't change
Without 'someone's' permission!
But what images were in his mind?
I refer to the creator,
The original author of the piece,
Original originator?
I doubt if we'll ever really know,
What thoughts were in the author's head,
Because the film version reigns supreme
And we've latched-on to that instead.
*

My daughter, Rebecca, and her husband's family are going camping tomorrow. Not just camping but spending 11 days in a very isolated place in the bush, five hours inland! I'd hate it, and I don't think she's too chuffed but she's putting family first. No electricity, no phone, no shops! Awful! Just six ks of river, freshly filled with fish. The menfolk are ecstatic. She's taking sketch pads and charcoal with her so I hope to see some interesting sketches when she returns. Here is Blake saying goodbye to Banjo, who, sensibly, is staying with us!
Posted by Rinkly Rimes at 7:38 AM

None-the-less, the rhythm of the illustration
seemed to communicate the words of the song -