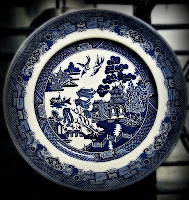 BLUE BIRDS
The story behind the famous scene is far too complicated
For a simple little verse to make quite clear.
Suffice to say two lovers were star-crossed, and never mated,
And they've been birds forever since, I fear.
On a hundred thousand teapots they have fluttered in the sky!
On saucers plates and vases they have soared.
Their wings have touched each others as in flight they've fluttered by,
Not united but close by the one adored.
And we look at those two soaring birds and give a little smile
Giving unrequited love a passing glance.
'So near and yet so far', portrayed in such a charming style.
A delicate portrayal of romance.
*
Posted by Rinkly Rimes at 4:07 PM