THE RESTING PLACE
Just a legend, that's all it was, told many times down the ages,
As family members reminisced and turned their history's pages.
'Poor little dear' they used to say 'Disappearing from sight!
Right in the middle of a party too! And in broad daylight!
They say she was a dear little tot, only five years old.
They say that she was pretty, with hair of the brightest gold.
Of course, the gardener was guilty, that was as clear as day!
He couldn't account for himself too well! He just spirited her away.
He said he was in the village, but he was never seen.
There was certainly something fishy. D'you know what I mean?
Of course, they couldn't charge him; the evidence was too vague.
But, after that he was ostracised ; treated him like the plague.
I wonder what happened to Ella. Of course, we'll never know;
By now she'd be an old woman; it happened so long ago.
One minute she was happy, playing hide-and-seek with the others;
All her cousins from London and her sisters and her brothers.
The next minute he'd got her, maybe strangled her in the cellar!
Oh it doesn't bear imagining. Poor, poor, poor little Ella!'
*
I inherited the mansion and I took a look around;
The attic was full of old junk, as I very quickly found.
I opened up a cupboard that was set against the wall..........
Little Ella's skeleton was very, very small.
*
----------------------------------------------------- 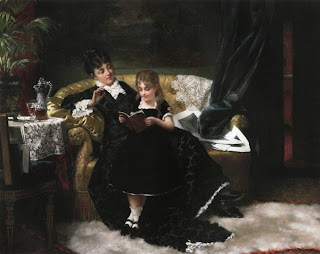 VICTORIANA
Victoriana at its best, in mood and dress and pose.
But why, I ask myself, are they in dark and mournful clothes?
If there's been a death, the faces simply don't reflect it,
And Death was such in those days everybody would respect it.
Yet here there's a delightful child with a smile upon her face,
And Mother looks serene and calm, exuding charm and grace!
The Mother's hand is graceful, upraised in a guiding way
Poised to point-out a tricky word, gently, as though in play.
It's a scene of domesticity, sweet and innocent.
Yet full of gloom and shadows and something malevolent.
The cloak that's hanging to the right and draping on the couch,
Appears to threaten as it looms with an almost dominant crouch.
How Victorians loved pictures that told a story too!
One feels compelled to study them to pick-up any clue.
*
Posted by Rinkly Rimes at 9:56 AM

A wonderful tale that gripped me from the start and made me shiver at the end....I loved it! Attics have always fascinated me, filled as they are with secrets from past lives, skeletal or otherwise.

I enjoyed the piece on Victoriana, too...tied in very well with the theme!

Nice - I like your prose style, and your images really add to the affect.