THREE WORD WEDNESDAY
http://www.threewordwednesday.com/2011/07/3ww-ccli.html
'glance, banter, fumble'
SPARE A THOUGHT
Spare a thought for the stand-up comic who doesn't make the grade,
Who doesn't make the people laugh and who hasn't learned his trade!
He strides with confidence on the stage, looking smart and debonaire,
Full of bright bonhomie and a dash of savoir faire.
His head is full of anecdotes, and other tasty stuff;
He's practised in front of the mirror. And now it's 'off the cuff'.
He starts off with a roguish glance to win the peoples' hearts;
He's studied other comics and has seen their clever starts.
He pulls a few funny faces that make the people grin
And then he thinks 'I'll tell a joke to pull the audience in'.
But the audience starts to fidget as the joke goes on for ever;
It seems they've heard it all before, furthermore it's not too clever.
He decides on a little banter with a man in the front row,
But he soon runs out of witticisms and the pace begins to slow.
By now our comedian's sweating, and looking a little pale;
He knows he's on a downward path! He knows he's going to fail!
He does a silly pirouette that ends in a stupid stumble;
He's looking for some funny words, but all he does is fumble.
He's hanging on to the microphone as though it's for dear life!
He remembers the jokes went down so well when he told them to his wife!
There's a murmur in the audience and a shuffling of feet;
And he suddenly realises this joke is a repeat!
Someone stands and leaves the hall, slamming the door on his way!
Lots of other people think they really don't need to stay.
Our comedian sidles off the stage; he knows his performance stank.
Why, oh, why had he handed in his notice at the bank?
*
---------------------------------------------------- 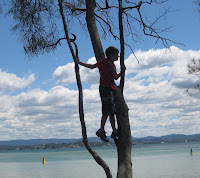 RECOMPENSE
I lived part of my life near Cape Town,
Where the mountains were high and wide,
Pointy in their perfection,

Rising on every side.
The Hottentots Holland Mountains
Towered near at hand,
Covered in beautiful vineyards,
Growing on fertile land.
And then we came to Australia
And found it very flat.
It's hilly, but nothing's soaring,
Nothing to marvel at.
But the beautiful lakes of Australia
Have taken the place of the peaks,
Where we live is surrounded by water....
Oceans, rivers and creeks.
And the lakes are the most resplendent,
Wide and deep and blue.
(And here's my eldest grandson, Blake,
Getting a better view.)
*
Posted by Rinkly Rimes at 10:03 AM

lovely both of them. poor comedian

The ending of the comedian was so comedically tragic. Great ending for that piece.

People are eternally asking, mountains or sea? the lucky ones get a bit of both. Cute picture!