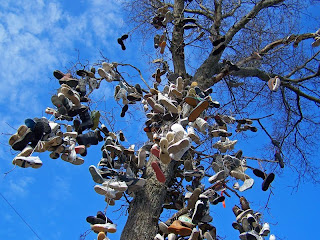 CROWNING GLORY
The poor old tree was standing there.
No leaf, no blossom; it was bare.
Its branches, etched against the sky,
Looked all withered, brown and dry.
The other trees in the neighbourhood
Looked green and verdant as all trees should.
Some even blazed  with red and mauve!
Quite an arborial treasure-trove.
The old tree sighed a tree-like sigh
Just as a breeze passing by;
' Oh to be decked with something rare!
So that people stop and stare,
Looking at me with jaws dropping,
Saying 'My! Now there's a topping!' '
The breeze  was magic (as you guessed)
And wished to see the old tree dressed
In finery like the other trees.
(Now you're all saying 'Good old breeze!')
Next day a Marathon was run;
Some people thinking it was fun
To get all sweaty, tired and hot.
(Needless to say, friends, I do not!)
The finishing line was beneath the tree
Where all the runners yelled 'Yippee!'
Dragged off their shoes in celebration
And tossed them high in exultation.
Most of them landed in the tree,
Hanging there for all to see.
As they hung from every branch and bough
The tree exclaimed
'I'm a shoe-tree now!'
*
-------------------------------------------------------------------- 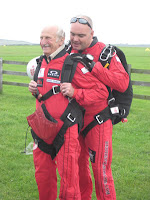 SKYDIVER!
Once has was a Desert Rat!
Now! What do you make of that?
It means that once in World War Two
He just did what he had to do.
He fought in the desert against the Hun
And as we know, the fight was won!
And so he's a hero, from times past,
But hero-worship doesn't last.
So now at the age of ninety-two
He's doing 'what he has to do'!
Proving his heroism is alive
He's preparing to go aloft and dive!
And who better to fulfill his dream
Than the men of the Red Devils team?
These pilots skim the British skies
As we look on with goggle-eyes.
The upper air is their domain
As they twist and swoop and climb again,
Crossing over in mid-air
And never turning a single hair!
Congratulations to all heroes
(My bravery's expressed in zeros!)
*
Posted by Rinkly Rimes at 9:08 AM

Wonderful sentiment in your tree piece, Brenda! I like the idea of the tree regaining a bit of its former glory. Well done!

I love this image of happy peopel tossing their shoes up into the air!