Come back, William Shakespeare! You're needed back down here,
To write another tragedy, on the lines of your 'King Lear'!
Though maybe it's a comedy; there are certainly buffoons.﻿
People who should be wearing funny pantaloons.
But 'How are the mighty fallen!' has a truly tragic ring;
It's normally applied to a great potentate or king.
Even the name of Rupert has a strange archaic sound;
Certainly, in modern times, there aren't many of them around.
Shakespeare could do justice to the many machinations,
The very dubious motives and the doubtful situations.
He could get inside the minds of all the actors on the stage,
Including all the bit-players, each herald and each page.
I could help him with the story because I feel I've got
A very decent handle on the main theme of the plot.
The Bosses say 'Get out there and get that special story!
Make sure our publication can cover itself with glory!
I simply do not care one bit how you get your information!
But don't tell me how you do it! Use your imagination!
But never tell me details! I just don't want to know!
If you don't do as I'm asking I'm afraid you'll have to go!'
And the poor benighted reporter, with several mouths to feed,
Spurred on by the Bosses, who are quite consumed with greed,
Bends the law, if he has to, and gets that certain scoop,
And he's rewarded handsomely for jumping through the hoop.
And it's true, the Bosses aren't aware, their blind eyes have been turned,
And if there's trouble the underling will get his fingers burned.
Where does guilt begin, my friends, and where does innocence end?
Whom should we condemn my friends, and whom should we defend?
Shakespeare could have worked it out. He'd have made it all make sense;
He wouldn't have been where I am, just sitting on the fence.
Come back, William Shakespeare! Write a 'Hamlet' or 'King Lear'!
Write a tragi-comedy and we'll all shed a tear.
* 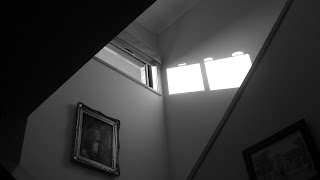 How many angles? Let me count them all.
A triangle in black first takes my eye
Cutting the tiny window to the sky.
That is, in fact, the ceiling in the hall.
Then comes the stair-rail angle to the right
Making a neat perspective with a line.
Somewhere those lines are certain to combine
Up to the left and somewhere out of sight.
Then comes the painting, never hung askew,
Which now seems tilted down as though to fall
And clinging quite uncertain, to the wall,
Deceiving us with angles all untrue.
Finally come the angles of the light!
My staircase! Such an optical delight!

The poem about angles is very original!