RUBY TUESDAY
http://workofthepoet.blogspot.com/2011/07/ruby-tuesday_25.html
HELL BENT
The very redness breathes of fire and brimstone!
The words, in darkest black, intend to scare.
The Wyldwood Baptist Church has good intentions,
But I wouldn't be encouraged to go there.
Who says I'm filled with Hell? I don't feel Hellish!
Full of imperfections, nothing more.
Purgatory is the very worst I'll warrant
When the time arrives for adding up the score.
And that's where all the others will be heading...
To some place for those who're neither good nor bad,
Those in the 'B. Stream', millions upon millions,
According to the average life they've had.
There may be some who're positively wicked,
But, with them, there is the puzzle of the gene.
With different parents, different antecedents,
They might not have been so vicious or so mean.
As to the very few who'll get to Heaven,
I wish them the best of luck on their white clouds,
Playing guitars and swapping boring stories
About how good they were, before they donned their shrouds.
My friends will be in Purgatory when I am;
No doubt we'll sit around and reminisce.
I'm not impressed by either Hell or Heaven;
So don't offer me eternal pain or bliss!
*
--------------------------------------------------------------------- 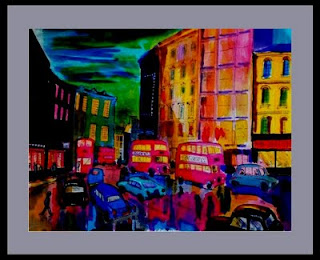 Gerald Gee
WHEN THE COLOURS WERE BRIGHT
Gerald Gee was a blogger
Whose work had great appeal.
Sadly, he has departed
And sadness is what I feel.
We shared this London, long ago,
Although without our knowing.
I, too, saw London blare and blaze,
Exciting, vivid, glowing.
For aren't all cities bright like this
When we are are starting out?
The colours burst out from ourselves
With a cataclysmic shout!
Gerald's youth had colour,
But was it in his mind?
Wherever the colour came from,
He's left some of it behind.
*
------------------------------------------
P.S.
This lady, Maureen O'Brien, came to entertain us at our club today and she surprised me by contacting me during the show and, later, asking me to discuss involvement with her in a project or two.﻿ We're meeting on Wednesday to talk further. I don't know whether I can find time for anything else, but it's good to look forward to something new late in life. 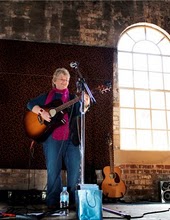 Sorry if I say that the billboard made me smile. ^_^ Looks like a joke ^_^

Oh my! I got scared the moment I read the billboard.

Hope to see you in my Ruby Tuesday entry.