POETRY BLOGROLL
http://poetryblogroll.blogspot.com/2011/06/thursday-think-tank-55-freedom.html
chose the topic
FREEDOM﻿
I never knew what freedom was until I reached old age!
One only knows true freedom when one reaches the last stage.
No mortgages, no school-age kids, no garden and no rules;
No worrying what others think (they may think we are fools!)
A day in bed? Why not, indeed! No-one need ever know
That we've turned our backs on winter and the chilly winds that blow!
A bar of chocolate in the night, just when the fancy takes us;
No-one to say 'Eat healthy food?', and nobody who makes us.
A TV show mid-morning? What lethargy! What sin!
We lap-up the obvious envy of our younger kith and kin.
The middle years are frenetic; we knew that at the time,
But we didn't know that growing old would be very near sublime!
There is a drawback, we admit; we don't have to be clever
To deduce these halcyon elderly years just cannot last forever.
If I could stop the clock, it's now that I would choose to stop it.
For old age has brought freedom, and no other age can top it.
*
----------------------------------------------------------------- 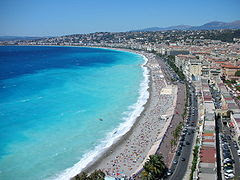 THE AZURE COAST
The Azure Coast, or Cote d'Azure, is in the South France.
I do not know it very well but I went there once by chance.
Hitch-hiking round the country, my two friends and I
Were fascinated by the heat, the clarity, the sky.
We felt that it was Paradise, compared to England's grey
And we stayed there for a little while, sleeping at the Y.H.A.
The area has a chequered past, from a thousand years B.C.
And artifacts are discovered there proving its history.
The Greeks and then the Romans made their marks upon the place
And a history of Barbarians is also one to trace.
For a time it was impoverished, with nothing but stagnation,
Until it had a re-birth as a tourist destination!
Tobias Smollett visited in 1763
And he coaxed the British Royals to spend winters by the sea.
As time went on the area grew popular with Tsars,
Queens and painters, wealthy men and, of course, film stars.
Now for a little boasting and all that that entails.....
The Cote d'Azure looks very much like the coast of New South Wales!
*
Posted by Rinkly Rimes at 6:55 PM

So it's true then! Growing old sounds divine.

Loved your take on Freedom. So true. Age frees us from so many inhibitions we harbour as kids and youngsters - what-if this, what-if that..