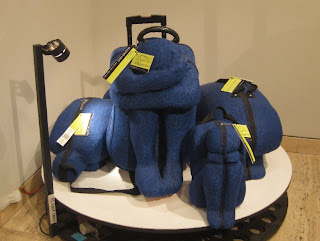 Seen at Sydney Art Gallery
ABC WEDNESDAY
http://abcwednesdayround3.blogspot.com/
Letter 'B'
BLUE BAGGAGE
The carousel, the baggage, the labels, the ennui,
The waiting at the airport..... where else could this scene be?
Then I saw the people, waiting to depart
And I was really taken with this quirky work of art.
The travelers are baggage, just objects, nothing more,
Strewn around at the airport, on the seats and on the floor! 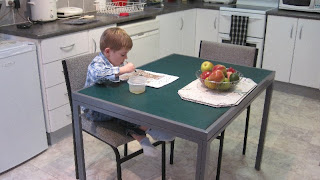 Yesterday three-year-old Max had a cough so he stayed with us all day. Here he is 'magic' painting.
Posted by Rinkly Rimes at 6:38 AM

Hi Doube R - The blue bags are just another example of "art" I can add to my collection of "fool the people art". Yeah, I'm thinking that you get my opinion of this. That being said, I very much like the poem you brought to the table so I suppose that artfully arranged and lighted baggage might be considered art if it inspires such a nice little piece.

PS like the image of young Max. I became a grandmother just one week ago tomorrow. Such joy!!

Those are great!! LOL!

Poor little Max. I hope he feels better soon. No cold showers and standing in front of open windows for him!!

No kidding! These are great! Very clever. I wonder if anyone has tried to 'claim' them!
Max is adorable.

Clever and fun as always! The blue bags are perfect for the B Day. And Max is adorable! Hope your week is going well, Brenda, enjoy!

What a great choice for the week! Love your poems as well! Always look forward to seeing what you have written.

Always, a clever post. I'll bet Max had as much fun as you did with the magic paints.

hate checking baggage; they get lost so easily.

I marvel at performance artists, but worry for their mental and physical health! You certainly got our opinions out with their photo.
And I marvel at your way with words!
Thank you,
HelenMac
ABC team