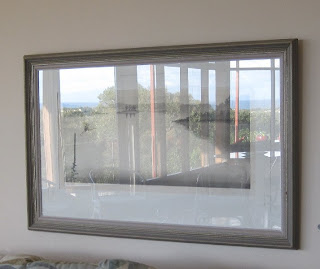 In a little suburban street
A mosaic stepped on by many feet.
Trampled upon, a work of art,
Maybe gazed at, at the start,
But now passed by! No admiration!
Someone took pains with this creation,
Looked to Nature to be inspired!
Was with creative passion fired!
After the earthquake*, art was needed.
Beautification plans were heeded.
Mosaics suddenly appeared
When the rubble had been cleared.
Dotted along the pavements see
Examples of the artistry.
But now it's all a bit ho-hum.
People go and people come.
Rushing past to do their shopping,
Never remarking, never stopping.
Only a blogging type like me
Takes the time to stop and see!
*

Beaumont Street, my favourite Newcastle street, was wrecked by an earthquake in 1989. Only 12 people died city-wide, but Beaumont Street had to be re-built.

An earthquake in 1989, how unnerving and tragic! But I do like the embedded memorial mosaic!

Yes, I like looking at pictures that reflect other objects and scenes! A good shot - you beat me to it!

Cool capture of the reflections. Very neat, I can see the sea. Awesome capture!

I enlarged the picture so as to see what was the hidden original ... I found it, but find I like the reflection scene just as well! Well, maybe even a bit better! :=}

I love how you used the colors and the 'paints' (and artwork) as your jumping off point for both poems. Both pictures created illusion, and your poems continued the story.

The painting prompt used very well in your poetic lines...

Very nice use of the paint prompt!

Here's to the blogging types like you! Well done.