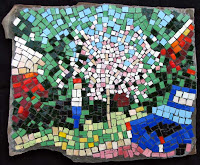 THIRTEEN THURSDAY
http://thursday-13.com/2010/07/28/thursday-13-week-82/
THIRTEEN PLACES
IN WHICH I HAVE LIVED.
I remember Margate, English summers on the sands
Where all  my cousins joined me in my play.
*
Then came Lichfield where I went when Hitler made his threats
And the children, to be safe, were sent away.
*
I lived in Stafford for a while with another family,
People who were very kind to me.
*
And Alton was where we settled when the world had settled-down,
A lovely village, full of history.
*
I traveled down to Brighton to a college by the sea
Where I studied subjects so that I could teach.
*
And back in Kent, at Chislehurst, I taught for quite a while
With the city life of London within reach.
*
London beckoned, so I went to enjoy the city lights
And sure enough, they glittered for a while.
*
But Gwanda, in Rhodesia, was a very different place;
A gold-mine town with a true colonial style.
*
Bulawayo was a city but more like a large town;
Still in Africa but more sophisticated.
*
Then back to Deal, in England, where my sister was so ill;
And an English winter, which I found I hated.
*
So I headed off to Cape Town, and that's where I settled-down;
Having a son and daughter was a pleasure.
*
Then to Australia, Gosford, a small town in New South Wales,
Where we ran a small motel, so not much leisure.
*
And, finally, to Newcastle, that's where I am today
Enjoying the delights of my old age.
*
And every single place has been a pleasant place to be
But this, I think, is the very nicest stage!
*


Here in Oz a shrimp's a prawn and cilantro's coriander
Keep that in mind when you cook this tasty dish!
The name's don't really matter for it's the taste that counts
And the taste of this is brilliant as you wish!
It's a perfect meal for summer nights (roll on Summertime!)
And the prawns look lovely laid out on the plate.
It's a quick and easy recipe that anyone can make
But your guests are sure to label it as 'Great!'
Marinate the prawns in the honey for a while,
Covering with cling-wrap helps a lot.
Then add the garlic, oil and soy and marinate some more,
The lovely flavour's sure to hit the spot.
Skin and chop the mushrooms, cut the onion into chunks,
Also the peppers, one size here 'fits all'.
Thread the lot on skewers, but watch out for the drips!
Some from the marinade are bound to fall!
Your kebabs are set for grilling, with some extra marinade;
Cook them till they curl up at the edges,
Then serve them any way you like, with bread or rice or plain,
With salads or with lots of crispy veggies.
The honey adds a yummy sticky surface to the prawns,
So be sure you have some napkins standing by!
There'll be lots of finger-licking when you serve these lovely treats!
And your reputation's bound to go sky-high!
*
INGREDIENTS

My group was asked to supply the entertainment at a Xmas in July gathering last night. 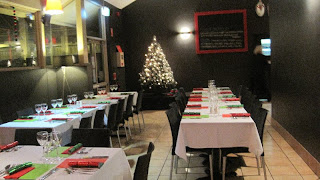 The restaurant looked very charming and orderly when we arrived. 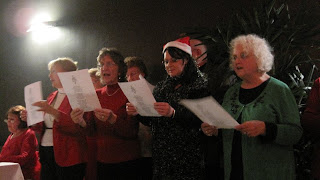 But the photographer seemed to get a shaky hand later in the proceedings!!!!!
We had a very exotic meal, many courses from round the world, and we were presented with four bottles of wine and unexpected payment! So it was an extremely successful evening on all fronts.
*
Posted by Rinkly Rimes at 7:38 AM

What a great T13 post idea. You have had a great life and I am impressed that you are almost 80 and blogging with the best of them! Keep on keeping on.

You've certainly lived in a lot of places. I've lived and London.

Wow, what an adventure your life has been! Fantastic. So much living. I am impressed, having never lived anywhere but where I am.

You are a gifted writer! Love that you rhymed your 13! Sounds like a life well lived.

(And thanks for the recipe, as well!)

I've been to Margate in 1974 and drink New Castle beer!

Wow! You've been to those places? I really would love the travel one day.

WOW. You've lived a really interesting life! I'm going to have to wade through your archives and read more!

On a side note, I just made a very similar shrimp dish, but with marmalade instead of honey. Where did you find yours?

I was born and raised in Gweru before my parents emigrated to Canada. There is no place like home!

You have moved a lot. So have I and I wish we could move every 5 or so years.

You've certainly been all over Britain, and looks like the world as well.

you are so lucky to be part of such different experiences :)

You are such a world traveler! It's simply fascinating to think of all of the places you have lived and how different they were.