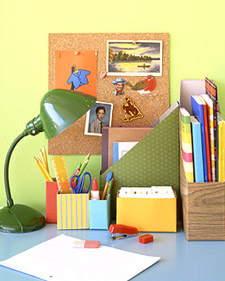 From a home-hints suggestion
COLOR CARNIVAL
LITTLE BOXES
My life was supposed to be lived like this!
But, alas, it has never been!
Everything in neat little  folders,
Blue and yellow and green.
When I imagined Motherhood,
In the clucky days of my youth,
I was going to be so perfect!
But I wasn't, and that's the truth.
I started domestic dreaming
When I was about sixteen,
And I didn't marry till thirty-six,
So, through all the years between
I dreamed of the perfect home I'd make
If I ever became a wife;
With precision and dedication
I'd organise my life.
Shots like the above inspired me!
My children would live just so,
With their lives in neat little boxes,
And their books in an orderly row.
Forty years later I look back
As old ladies often do,
And I realise, with humility,
That I've just muddled-through.
I still long for things to be labelled
In an 'In-Tray' and 'Out-Tray' scheme,
But I know a leopard can't change its spots,
And it's all an impossible dream.
Out there are Domestic Goddesses
Longing to cast the first stone.
But I'll welcome comments that tell me I am not alone!
*
------------------------------------------------------ 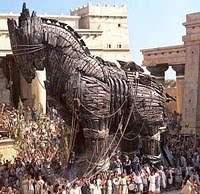 Trojan Horses nowadays are simply just a feature
Of internet complexity, not a gigantic creature
Like this great horse that we see here, which certainly is no toy!
Yet I have to admit there never was a flesh-and-blood horse of Troy.
*
Paris of Troy stole Helen from Menelaus, the Spartan King,
Who then waged war to get her back, for she was a lovely thing.
For ten years Menelaus sought to pillage and destroy
The mighty city where Paris lived, which we now know as Troy.
*
At last he seemed to lose the will to fight to the bitter end,
The Trojans were too successful in their efforts to defend.
The attacking army then withdrew, for they were a true spent force,
But they left behind an edifice in the shape of a mighty horse.
*
This horse was sacred to Trojans, for it was made from the cornel tree,
So the horse Menelaus left behind was a wonder for all to see.
And he left an inscription which clearly said 'With this horse we now give thanks'
And then the army retreated, officers and all ranks.
*
The Trojans were delighted that the War had now been won,
They had seen the Spartans wilting, they had seen the Spartans run.
Now here was a mighty offering which they could all enjoy.
So they dragged and pulled the Trojan Horse inside the gates of Troy.
*
But the horse was full of soldiers! This the Trojans didn't know,
Though they found it very heavy and their progress very slow.
At last they had it safely inside the city walls,
And it is now Menelaus wins and the Trojan's city falls!
*
For the soldiers leapt out of the Trojan Horse, and the army then returned,
And the city of Troy was pillaged and ruined and wrecked and burned.
*
So next time you find a Trojan Horse has infiltrated your disk,
Remember, if you let it in you were taking quite a risk!
*
Posted by Rinkly Rimes at 8:54 AM

You really made my day with two wonderful poems.

I can identify with dreams of a perfect house with perfect children and what happens when reality sets in. ;-)

Your poem on Helen of Troy is a far better read than the Illliad. It tells the whole story so completely. I love it.