Blue for a Boy.


BLUE FOR A BOY
I think it's rather odd, don't you,
That little boys are dressed in blue,
While little girls in pink are dressed.
The reason? I have never guessed.
Mind you, I think it has its uses;
The colours give us no excuses......
Should a baby look like 'Fred',
If a pink bonnet's on it's head,
We know it's of the feminine gender
Delicate, sweet, and rather tender;
And.... should another appear as 'Sue'.....
Because its bonnet's coloured blue
We give it a tractor for a toy!
Blue? It's bound to be a boy!
The colour-coding gives us the clue;
Pink is a girl and a boy is blue.
*
I have a theory of my own,
As to why the colour-coding's grown.....
I think it goes back to early times
When people chanted nursery rhymes.
'Little Boy Blue' wore blue, let's say,
Just by chance on a certain day,
And a poet wrote a verse or two
Meaning 'Little Boy in Blue'.
The verse 'caught on' as we like to say,
And the rhyme exists to this very day.
From then on people linked 'boy' and 'blue'
And the strange little meme just grew and grew.
Then, the mothers of baby girls,
With dimpled cheeks and pretty curls,
Decided that they'd have a think
And then announced 'And girls wear pink.'
*
I've no idea if this theory's true,
But I think it fits the bill, don't you?
*
------------------------------------------------------------- 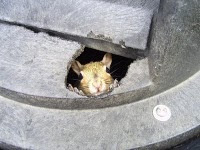 Ellie Vellie
SNACK-BAR!
'You must seek among the branches' said Ma Squirrel to her son
'Or look-out for little acorns on the ground.
Tiny creatures such as we are
Need to know where things for tea are
And on the forest floor they can be found.
*
You must scratch down in the pebbles and the undergrowth, you know,
And that is why you have such useful claws,
With your little tail erect
You are certain to collect
Some quite delicious morsels in your paws.'
*
But Greybeard was a squirrel with a very wayward mind
And a nose that was ideally made for smelling.
He found a garbage bin
And he hurried to climb in
And what he thought to find there there's no telling!
*
Now inside there were some cartons with MacDonalds written large
And a great aroma of discarded chips
And he snickered with delight
As he took a little bite
And he licked his very rodent-looking lips.
*
'Who needs acorns?' squeaked young Greybeard, wiping whiskers with a paw,
'Though Mama may think this eating is a sin,
Trees from little acorns grow,
But now at last I know
Something better grows inside a garbage bin!'
*
Posted by Rinkly Rimes at 2:36 PM

Funny but I always wore blue when I was little & I still do wear it a lot. My sister got pink dresses which I didn't like. I still never wear pink unless it's shocking!

Love the painting and the poem. I like the color blue so even if I'm a girl, I asked my mama to buy me blue clothes when I was young.

It is a curious thing, Brenda, and your theory could be correct. I prefer blue to any other color too, so perhaps I'm part boy!

Who thought of Blue for boy Pink for girl? Most have been to tell them apart. However in today world anything goes.lol.

Enjoyed your poems. Have a great week. Debbie

sweet and smart blue post.
thank you for the poem.

love your poem. Don't know why blue for boys etc...but, I do think pink is very feminine.
Kathy

Could be true, about the blue. It sure helps with identifying infant gender, especially. ;-)
...Karen