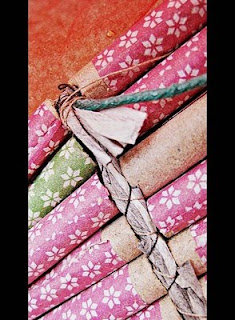 GHOST!
For many a year I've haunted this old haberdashers store;
A hundred, maybe two or three; it could be even more.
I  have drifted round the counters and swirled around the shelves
And toyed with old-time order-books lying sadly by themselves.
I have moaned a little, softly, and wept a tear or two;
I have done the requisite ghostly things a ghost like me should do.
Of course, 'they' never saw me; I've always been quite shy;
Though, sometimes someone caught a glimpse out of the corner of an eye.
I had grown accustomed to solitude; life lived alone at night;
I had almost forgotten the old times and love and its delight.
'My' shop was in a museum and it made my heart rejoice
To hear it's praises sung each day by a visiting human voice.
*
But now even the half-life's over; 'they're' pulling the old place down.
'They' want to build a supermarket in this part of town!
And 'they've' cleared out the bales of cotton, all faded and tied with cord!
Those cottons that so reminded me of the man I so adored!
*
' I think the pink one, dearest'.... thus spoke my determined Mother.
'No, no! Mama!' I answered.'I much prefer the other!'
For hadn't Ernest told me that green was his favourite hue?
And hadn't I decided, then, that only the green would do?
In the end my Mother capitulated, sighing a maternal sigh;
She knew that I was determined, though she didn't understand why.
We took nearly all the green roll, leaving the pink aside.
And I knew, before the month was out, he'd ask me to be his bride.
Mother made me the prettiest ball-gown, with a neckline trimmed with lace
And I saw myself in the mirror, a picture of charm and grace.
*
But Ernest married another and I had no heart to give
To any other suitor. I lost the will to live.
They said I died of consumption, but I died of a broken heart;
What was the point of living since we had to live apart?
So I came to haunt the haberdashers, where I'd once been glad,
I was a delicate little ghost, in sprigged green cotton clad.
*
Now 'they've' thrown out the bales of cotton; 'rubbish' they said it was,
And my poor heart broke for the second time when they did that because
They were my link to a happier time. Now I'll be departing soon
To continue my ghostly existence somewhere beyond the moon.
*
------------------------------------------------------------------- 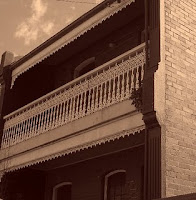 How I love the style and grace
Of this house feature......Paddington Lace!
It's an old Victorian decoration
Still revered throughout the nation.
San Francisco has the same
Though there it must have a different name.
'Paddington's' part of Sydney City.
But wherever it's found, it's very pretty.
*
Posted by Rinkly Rimes at 6:26 PM

That is so bizarre, we are thinking on similar lines, loved your magpie, a great read.

Hello there! Your Magpie Tale is enchanting ... I loved every word of it.

What a wonderful Magpie. I loved your take on this one. She is a shy little ghost, but I certainly felt her pain. You are a very accomplished writer!

oh such a sad sad tale...where do you go when even as a ghost your time comes? Nicely done.

Haberdashery and Paddington lace! Nice connection in time and place.

What a lovely Magpie.Very sad..

Wonderful! This actually reminds me of our family's dear Aunt Winnie, who was jilted by a lover and remained single all of her nearly 100 years. She worked for most of her life in a haberdasher's shop.

If your ghost befriended Cathy of Wuthering Heights, perhaps Cathy wouldn't be so tormented.

For even though there is sadness, your Haberdasher's ghost is such a sweet little thing.

How the magpie wields such lovely stories...

Somewhere beyond the moon sounds like the perfect place for a charming ghost! Terrific piece.

Wonderful..I could think of a worse place to haunt. Time to head out to the Light!
(Two Ghosts)

This is a magical tale. I loved it. I think your ghost should get herself some chains, and cause a bit more of a ruckus. Maybe she can scare the developers away.

What a sad but lovely poem. Thanks for sharing :)