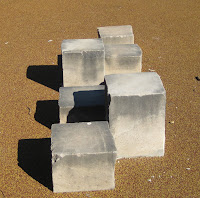 
JUST BLOCKS
I wonder where we draw the line
Between the humdrum and divine.
These blocks are in an open space,
Not organised for style and grace,
But just  for children to step and climb
Having a childish carefree time.
'King of the Castle' hear them cry
As they stand up top and feel so high.
But when the shadows play their part
These blocks become a work of art.
There's symmetry, there's balance too;
There's even character; they're not new.
Yet some workman, I'll be bound,
Merely placed them on the ground.
They should be in a gallery,
Entitled 'Crass Epitome'
Or something else that has an air
Of creativity rich and rare.
I now nothing of art it's true
So this is a brash untutored view.
I only know they gave me pleasure
Whether they were trash or treasure!
*
-----------------------------------------------------------------------

Please don't read this poem if sad things about animals upset you!

I'm certainly no do-gooder,
For I'm not the thoughtful kind,
And Animal Liberation
Seldom enters my mind.
But today I heard a statement
That rocked me on my heels
And filled my brain and, yes, my heart
With agonising squeals.
The Speaker on the radio
Said 'Scientists agree
That a pig has the intelligence
Of a child when it is three'.
That fact alone was shattering!
I continued with the talk,
Admitting, in my heart of hearts
That my favourite meat is pork.
'In fact' the Speaker added now,
'When their time comes to be slaughtered,
And hung on hooks in abbatoirs,
Yes, 'hung and drawn and quartered',
They realise the fate in store!
They actually show their feelings,
And the air is rent with cries and groans
And almost-human squealings.'
I'd like to say I wont eat pork
Again my whole life long!
I'd like to say I'll protest their cause
In the streets, to right the wrong.
But I'm as frail as anyone;
Time will dim the way I feel,
But at least today all I can hear
Is a scared pig and its squeal.
*
Posted by Rinkly Rimes at 7:33 AM

Love your shadow shot, and the verse is excellent.

I like those block shadows! Great poems (yes I dared to read the second one). I love bacon and I so wish I didn't...

love this shadows and the poemsxklynda