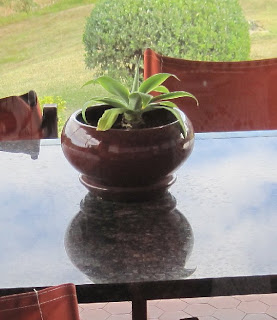 Arthur Hughes
THE SOURCE
Witness the lovely Ophelia, there by the riverside.
We all know how she pined for Hamlet and how, in the river, she died.
We see her planning her drowning, gazing down at the water's flow,
Agonising over Hamlet and doomed to the water below.
Screed upon screed has been written of her heart-breaking love-affair.
Artists have thrilled to the vision of her flowing still-lovely hair
Floating along in the river, framing her still-calm face,
But Katherine preceded Ophelia, and, of her, there isn't a trace!
Shakespeare was just a young fellow of sixteen or so it is said,
When a girl from a nearby village was found in the river, dead.
The drowning was seen as a mystery; the girl had a lover, it's true,
And the gossips spoke of a broken heart, as gossips often do.
She was only a humble creature, maybe a lowly maid,
And she was carrying buckets, part of her stock-in-trade.
Finally, it was decided that accidental death
Had caused her to fall in the river, and take her final breath.
Maybe she overbalanced, or tripped on a rock by chance,
But the rumours always persisted as a story of romance.
Shakespeare was young and dreamy; he thought of the girl, no doubt,
And. as a man, it's rumoured, he let the story out.
'Katherine' became a lady of noble and royal birth,
Far removed from peasantry and the toil of the common earth.
Shakespeare 'created' Ophelia, immortalised her history;
Imbued her with grand yearnings and an air of eternal mystery.
No-one knows, for certain, that this was Shakespeare's source,
And no-one ever will know at this late stage, of course.
The uncertainty about it must be underlined.
But the girl's name was
KATHERINE HAMLET
So make up your own mind!
*
Posted by Rinkly Rimes at 11:54 AM

A great still life - your rime says it all!

You've capture a lot in just this simple shot - reflections, shadows, the whole kit and kaboodle! I love the blue sky and clouds reflected in the table, too!

That is a dilemma! But you have given us a beautiful photo and poem!

Lovely photo of both reflection and shadow

Lovely shadow and reflection and the perfect words as well! Interesting piece about Ophelia and Katherine Hamlet! Hope your weekend is going well, Brenda!

Such a simple shot, and a lovely verse to go with it.

This is lovely! The shadow/reflection not only matches the bowl on the table but also that perfectly round bush in the background! Enjoy the rest of your weekend :)

The picture is just beautiful and your verse is even more incredible. You have so much talent.

As far as the shadow shot, it is wonderful. I believe we can rely on the universe, nature. It is constant and regular and a shodow will be cast from the sun, and even black flat surfaces will reflect, we can count on it.
And now I know a bit about Hamlet. I've never read any, (But I did pass Sophomore English class, barely).
Vey nice words. The poetry is storylike and easy for me to read. I liked it all very much.

How reflective...must go back and view my shadows with newer eyes!

The reflection became so much nicer after I looked at it for a while. I didn't even notice the sky at first. Nicely done!

Beautiful still life. Your poetry is perfect for it.

Nice shot and a lovely poem to boot.

Oooooo! Nice! All the way around!