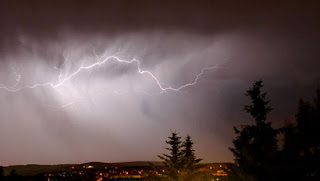 CARRY ON TUESDAY
http://carryontuesdayprompt.blogspot.com/2010/07/carry-on-tuesday-62.html
The line in blue is from 'The Invention of Everything Else'  by Samantha Hunt.
PREGNANT PAUSES
Lightning first and then the thunder and in between the two
That pregnant pause when we wonder what the elements will do.
Will there be a far-off rumble as the storm escapes to sea,
Or will there be a roaring crash that spills my cup of tea!
*
I'm reminded of the doodle-bugs as we knew them long ago,
When robot bombs rained terror on the Britishers below.
First would come the rumbling sound, almost a peaceful purr,
When we would stop and listen; were we safe just where we were?
And when the engine cut out there would be a pregnant pause
And we would seek for cover, in whatever place, because
As soon as the robot's engine stopped it would drop down to the ground,
There exploding! Causing havoc to everything around!
*
A pregnant pause is useful, quite effective on a stage,
Where actors use the pause to emphasise their grief or rage.
But when there are storms or doodle-bugs about we wish them hence.
The pregnant pause will always make me
Much too tense!
*
-----------------------------------------------------------------


Rush and tumble! Noise and speed!
Enter a new world when you read!
All the flurry fades away
Din and chaos dare not stay.
In words, you find the things you need.
New or old, a book to read
Grants you the right to sit awhile
*
Then face the rude world with a smile.
*
Posted by Rinkly Rimes at 9:28 AM

a pregnant pause can instill worry and fear during war times, for sure. i pictured the scene well with your words.

reading does grant the time to sit awhile, doesn't it? i enjoy reading when I get the chance. it takes us everywhere in an instant.

sorry for my long absence. i've been busy with family, etc... hope all is well.

The pause can be one of relief or tention! A beautifully worded poem on this anomaly! I am so glad I did not know those war tensions in Britain! It is frightening enough to just hear about them!

And your second poem about reading is filled with some fun thoughts! Love the idea of reading granting the right to sit!

never had to duck a bomb but have had a few pregnant pauses ducking my wife's wrath. have learned to make the pauses last a long long time. nice job.

Great post, though a sad memory to live with.

awesome,
I try to get the idea of how to do it,
excellent example.