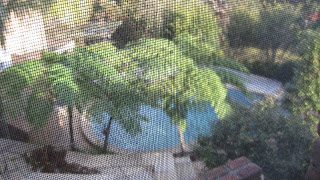 
VERY OZ!
Just a picture from a window, that may not mean much to you.
After all I have to say it's quite an ordinary view.
But it suits 'My World' this-morning (I shot it yesterday)
Because, about Australia, it has quite a lot to say.
Though it's rather cold this time of year, it's summery and green.
This is our mid-winter and a chilly-season scene.
The locals think it's normal to see blossoms and green trees,
But I'm a Pommie import from that cold land overseas,
And I never cease to marvel at the way our world appears
In the Winter, though I've lived here now for more than thirty years!
*
Look closer, though! You'll see this shot is a strange distorted view,
Not like any sort of window you're used to looking through.
I took it through the fly-screen, another Aussie 'thing'.
*
Flies! Something to look forward to as Winter turns to Spring!
*
---------------------------------------------------------------------


I'm addicted to the second-hand, the bargain and the snip,
A Garage Sale may be far away but I yearn to make a trip.
To rummage through another's 'stuff' is tantamount to bliss.
Even though you'll sometimes hear me mutter 'Fancy selling this!'
The wares look full of promise when they're piled-up on the floor,
Even though I'm never really certain what I'd use them for.
I'm hopelessly impractical, but I've got imagination;
My husband tends to shy away with a look of indignation
When I say 'Oh look! A broken lamp! You could fix that quick as lightening!'
I get a smouldering sort of glance that's really rather frightening.
' How about that little chair? You could fix the broken seat!'
Or 'That just needs a lick of paint! You could make it look quite sweet!'
I even try dishonesty, saying 'I only wish that I
Were capable of fixing things! But I can't although I try!'
He knows I never try at all; I'm much too busy writing!
The world of paint and screwdriver has never been inviting.
So we've got an awful lot of stuff that's cluttering up the place;
I believe the area in the roof's an absolute disgrace!
So many good intentions (those jobs with him in mind)
That anything that's really ours is always hard to find.
'We must get rid of this rubbish!' he is inclined to wail.
'I know! I've got a great idea!
Let us have a Garage Sale!'
*

Hi Brenda, I really enjoyed your "Very Oz" rhyme: the flyscreen, just like Zululand on the warm tropical East Coast of South Africa. And the Garage Sale. How don't many of us relate to that. I also am most impractical when it comes to fixing things. A shoe for a hammer and a kitchen knife for a screwdriver is my choice of tool if fixing was left to me. Tomorrow I have a post about a project I've completed - I think you will understand more than anyone. And you have encouraged and inspired me (with your e-mails and your blog posts) Have a wonderfully cool winter's day. Greetings from the hottest weather in Africa (well, my opinion!) Jo in Khartoum

What an interesting capture, Brenda! I can understand the different kinds of seasons -- I grew up in Texas and Seattle is about as different as it can be and I love it! Love those garage sales, too! Have a great week!

That is amazing how green it looks through the window for winter. I like the view through the screen. Almost looks like needlepoint.

Rinkly: Cute photo through the screen, we are very hot in the USA.

What a lovely winter picture! Bet that fly screen is needed!

That's a very beautiful picture, showing your kind of "winter" !

I loved your photo, it looked like a painting. And I think your winters sound perfect for me! Lovely description!
I am with you on the garage sale poem! I think we could have fun! Your words expressed my feelings!
Love Di ♥

Everytime I read your wonderful rhymes I think I ought to sit and write a poem. But with the house up for sale, and all, well, keep on inspiring me! http://mymuskoka.blogspot.com/2010/07/treated-like-princess.html