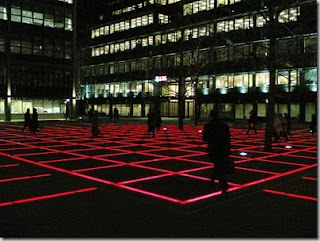 RUBY TUESDAY
http://workofthepoet.blogspot.com/
FINSBURY AVENUE
I'd feel like playing Hopscotch if I ever found my way
To Finsbury Avenue at night! All so different from the day!
In sunshine there would be revealed a street quite plain and drab,
Relieved , maybe, by a big red bus or a big black taxi-cab.
We'd hardly notice paving-stones, just tread on them, that's all,
And our interest in their squareness would be infinitely small!
But light them up with scarlet and the playground is complete!
A vast expanse of checker board is there beneath our feet!
The businessman with his briefcase would suddenly start hopping!
The Granny would lift up her skirts and drop her bag of shopping!
An urge to be a child again would pop into each head
Just because Finsbury Avenue  outlined itself in red.
*
------------------------------------------------------------------ 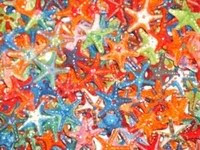 The beach lay littered with starfish
The tide was running out
Receding was the water
They could not live without.
A hundred thousand starfish
Like stars in the sky at night
Lay beached on terra firma
Unable to put up a fight.
Each one would die by the evening
Before the sea came rushing in.
Theirs' was a hopeless battle,
One that they could not win.
Then I saw a stranger walking
Along the sandy beach,
Passing the dying starfish
Lying within his reach.
I saw him bend and take one
Hurling it into the sea.
I saw him bend and throw one,
And then throw two and three.
And still around him lying
Were the thousands still close to death.
What difference was he making?
He should have saved his breath.
'Why save a single starfish
When so many are left to die?'
I asked as the man drew nearer
And I managed to catch his eye.
'You can't make a bit of difference,
The dying will still go on!
You simply can't keep throwing
Until every one has gone!
There's not a chance that you'll prevent
The inevitable slaughter!'
Yet still he bent and still he threw
Starfish into the water!
I laughed unkindly at his deed
'Why don't you just ignore them!
Do think a single starfish here
Will know what you're doing for them?'
Then, he said, as he bent to a starfish
And readied himself for a throw
'The world wont know the difference,
But, believe me, THIS starfish will know!'
*

Nice post and story! The photo looks cool with the walkway lit up at night.

I found my way to your wonderful place of rhymes by way of Diana's blog. I came to read about her toad but before I got there, I had to read your latest! How I love rhyming. My mother was a rhymer and she passed the gift to me but I'm not nearly as good at it as she and certainly not nearly as gifted as you are. I love both of these, but my favorite is the starfish.

What a lovely post and story, like the collection of colorful starfish, the lighting on the walkway looks cool in the night.

What a great capture, all those red squares. :))

that picutre looks amazing and I always loved the starfish poem

That lighting is just great

it's always the simple things ...
My Ruby Redness