ABC WEDNESDAY
http://abcwednesdayround3.blogspot.com/2010/07/is-for-addition.html
(Back to A again! Congratulations on a thriving meme!)

ACME WRINGER!
Now it's probably quite clear to you that this isn't a girl of six!
(If you haven't noticed you're really in a fix!)
He heads this blog, an injured man, an incongruity,
Simply because, strange as it seems, he reminds me of ME!
Now the tale of the Acme Wringer may seem far removed from him,
And the story of his injury was certainly more grim,
But the fact remains that I'm like him, very odd but true,
Because you see, as a little girl, I hurt not one arm but two!
*
It happened like this..... a display was held of ' an up-to-date invention'.
The date was 1936 (I now am drawing a pension!).
My Mother and my Aunt were there with cousin Mike in tow,
When they saw the event was advertised, they thought that we should go.
* 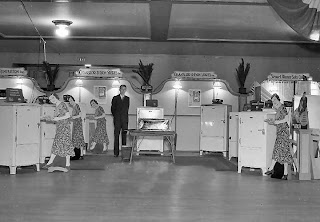 Exhibition of the time.
Until this time a wringer had always been worked by hand;
A very tiresome, tiring task, as you can understand.
Now came the Acme Wringer, worked by electricity,
And everyone was excited at this bold modernity!
Mike and I were naughty brats! We raced around unchecked!
The whole show was in danger of being really wrecked!
We chanced upon a Wringer which we lovingly regarded,
The man in charge had gone to lunch! The whole thing was unguarded!
It was rolling idly by itself as a sort of demonstration!
To two young brats this vision was an open invitation!
'Put your hand in there' said Mike. 'See if it goes through!'
I put one hand on the rollers! Then I foolishly put two!
Sure enough they did go through, but my arms went through as well!
Fortunately someone saw and rang a warning bell!
By the time assistance came my way my screams were very loud;
They drew the attention of my Mother, somewhere in the crowd.
When she saw my predicament she fainted right away!
To see her darling's arms like that .....rolling on their way!
Someone came with a hammer and broke the machine in two
And soon my poor little mangled arms were very much in view.
The setting had been 'Blankets' and I was a skinny child,
And so my injuries, I'm glad to say, were tolerably mild.
Still, I had to have time off school and I had to wear two slings.
'Silly girl!' my mother said.......among lots of other things!
* 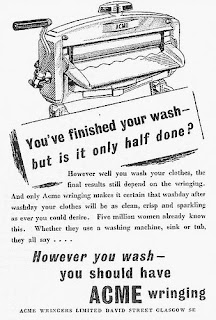 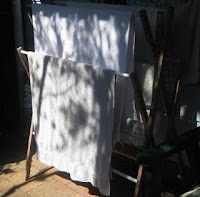 Australian soldiers, 'lost' for sixty years, buried at Fromelles in France.
Posted by Rinkly Rimes at 6:31 AM

Oh my, oh my, oh my!!!
You were one fortunate little brat oh I meant to say girl (:0)
What a story and you are right about the now a day lawyers rubbing their hands together.

Ouch! is right! Glad it wasn't any worse! And, yes, things are definitely different these days! Hope you have a great week, Brenda! Welcome back to the ABC fun!

You absolutely win for most creative : ) Love it! Happy Beginning again!

What a great poem!
I remember those wringers - we had one when I was a young girl and I can remember as well my brother getting his arm stuck! Haven't thought of that in a long time! thanks for the memory!

Double ouch! But you got time off from school. What kid didn't enjoy that.... for a while anyway.

Oh! Ouch! I remember those machines -

I remember those things, too! Definitely feared getting clothing I was wearing caught in that contraption. Great poem!

Wonderful linking poems. Your first taste of modern technology no wonder you are hanging your sheets out to dry.
Such a sad story about the Australian soldiers, its amazing that they have been able to identify some. At rest and remembered.

A Plus for creative words and the story of the hazards of a wringer!
As a child in the 1940's I was fascinated by the one in my grandmas basement and the thought of what could happen if the wrong thing went through those rollers. I could see myself helping Grandma and worrying about the dangers which she emphasized every time!
Helen Mac from the ABC team

Oh that must have been awful. I remember when I was little my Mam got her hand caught in one of those electric wringers. However eventually the top sprung off. Still it was painful for her. Before that she had one with a handle. Much safer!

This was so cleverly written I got "caught up" in the adventure. That had to have hurt something fierce. Love the old time ad for the ACME wringer.

My word veri is apropos of ABC ayera

Ouch.. that would have certainly been painful...