The words in blue are from the opening to Rupert Brooke's famous poem
IF
'If I should die'...... well, let's change that to 'when'!
*
The ''If' referred to a world of fighting men,
Men who went off to fight for an ideal
Which, nowadays, seems evermore unreal!
We think of them as full of youthful beauty
All signing-up and off to do their duty.
We think of them dying in a wretched mess
Of mud and blood and other awfulness.
And Rupert Brooke was lovliest of all,
A godlike boy but destined for a fall.
* 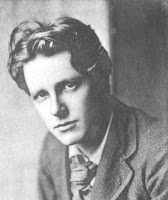 Hello Bloggers!
Well, hello Bloggers.
It's so nice to have your company once more!
I feel you're there, Bloggers,
In the air, Bloggers!
Once again we'll meet in cyberspace and know what for.
You do the trick, Bloggers,
When I click, Bloggers,
And this Blogging business thrills me through and through!
You
Make my day, Bloggers,
In such a charming way, Bloggers!
Isn't it good that we can meet,
Happily in Computer Street.
This is my little daily treat
HALLO!

Enjoyed how you turned a poet's words from afar into your own reflections of "star stuff"! A beautiful idea! And then, a little walk on Computer Street with you was so much fun!

It must be a good feeling to know your destiny has been fulfilled.

Hallo! I'm newly come by your blog but I'm thrilled by your poems - such clever comments on your photos. Somehow, poems draw me on to think further than a simple textual comment tends to do. I particularly love the one of the stained glass colours beneath the little chairs.

beautiful...and I already hava a place waiting for me. "Ursa Major" is obviously my place in the sky. When you finally get there oome on by.

What a lovely, thoughtful tribute and poem.

I really like the idea of being made of "star stuff"

I love hearing more about Rupert Brooke as a part of your poem. Yay!

My Carry On Tuesday