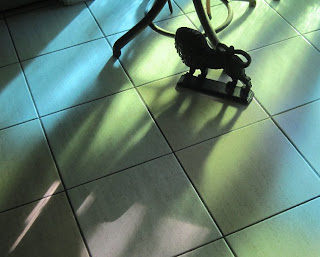 THE DOOR STOP
He knows he's a noble beast! So he stands on guard at the door,
As the glass throws evening shadows across the creamy floor.
Maybe he's come from India; maybe from Siam;
But he knows very well he's a treasure so he thinks
'How great I am!
I may be only a door-stop now, but when 'they' were overseas,
They stopped in the market, wide-eyed, and I heard the lady's pleas.
'Look at that beautiful lion! It wouldn't weigh too much!
I could carry it in my luggage! It's so beautful to touch!
Look how the tail curls over! Look at that wonderful mane!
I promise I won't buy anything else until we get to Spain!'
And so, of course, they bought me (though I think they haggled a bit)
And I fitted into a suitcase, though it was a rather cramped fit!
And here I am, as a door stop, with nothing to do but stand,
And 'she' hardly ever notices me! I'm not in much demand!
But that's the way with 'mementoes' bought in a holiday mood!
I feel I'd like to trip her up! But I wouldn't be so rude!
I'll simply give her a baleful glance when she goes to walk outside,
For I am the King of the Animals, and (sorry) I have my pride.
*
-------------------------------------------------- 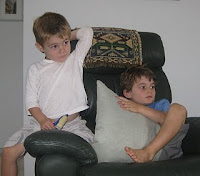 Two little boys are 'sitting still', watching a video.
But, in the way of all little boys, they're still very much 'on the go'.
Scratch and wriggle, writhe and squirm,
Each one like a wriggly worm!
No wonder they sleep like logs at night,
Wriggling over! Out like a light!
*
Posted by Rinkly Rimes at 7:06 AM

He;s a noble beast and casts a great shadow too!

I think this is the first time I have seen a doorstop shadow! And what a beautiful one it is too! And love the poem complementing it!

What a beautiful doorstop! And what a great shadow shot he makes! Lovely poem as always, Brenda! Hope your weekend is going well!

A lovely photograph. I like the colours and the shadow. And I know what you mean about mementos. They quickly fade into the background of your life.

A gorgeous shadow shot and the poem I enjoyed greatly as I always do! Enjoy the rest of your weekend :)

Great doorstop, and what a neat shadow.

What a lovely doorstop..and it sure gave a beautiful shadow..
The little guys are so cute..
Happy SSS.

Love the doorstop shadow. Oh to have as much energy as the little guys.