Rolling with the Punches! 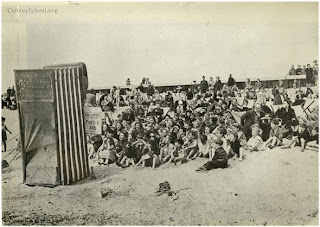 THREE WORD WEDNESDAY
http://www.threewordwednesday.com/2010/07/3ww-cxcix.html
This week's words......hatred, cramp and abuse
ROLLING WITH THE PUNCHES!
Ah! The innocence of childhood in those days so long ago!
All the simple pleasures when the pace of life was slow!
The charming little children being biddable and sweet
And playing with a rusty wheel with the neighbours in the street!
But just consider Mr Punch and the 'Punch and Judy Show'!
Then you'll forget your sentimental backward-looking glow!
Mr Punch was evil, filled with hatred, a real brute
With his predatory long nose and his jolly clown-like suit!
He would abuse his family in a really awful way,
Bashing the Baby's head in to force it to obey!
And, when Mrs Punch objected he killed her in a trice!
Two deaths in as many minutes! No it wasn't very nice!
Then he hurled them from his window to complete his wicked spree!
Would this be fare for children now? It was plain brutality!
There were several versions of the 'Punch' tale but this was quite the worst!
And...... wait for it......the children always asked for this one first!
Children relish violence! We cannot cramp their style!
So don't look back on the old days with a dreamy gentle smile! 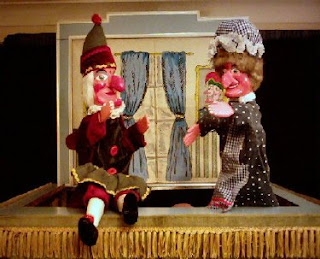 Typical versions of the Punch and Judy puppets. The baby takes after Dad!
QUOTE
"In the typical Punch and Judy plot, Mr Punch is left in charge of the baby. He becomes infuriated at its crying, and thumps its head against the stage in order to put it to sleep. When Judy arrives to see what the commotion is about, she attacks Punch for his cruelty. Punch flies into a rage, eventually beating her to death with his stick and throws the two bodies out of the window." 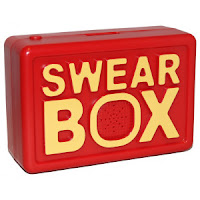 BLOG!
I've always longed to swear but been too scared to,
I've longed to spit and snarl but never dared to.
Though I've been consumed with wrath
Like some elemental Goth
To lose my gentle image I've not cared to.
But I've become a Blogger only lately,
I'm no longer calm and ladylike and stately.
If I'm bitten by a dog
I scream 'Blog! You Blogging Blog!'
My frustrations have all gone, quite consumately!
So, all you Bloggers, learn to swear unfettered
For BLOG's a word that simply can't be bettered;
It's explosive, it has punch
And I've got a kind of hunch
That it sounds like something worse to the unlettered!
Don't offer any grovelling apology
You haven't voiced some hint of rude biology.
And they'll never hear you utter
Those expletives from the gutter.
*
Now I'll close before I eat my own tautology!
*
Posted by Rinkly Rimes at 11:02 AM

I just love the Punch and Judy poem!

Couldn't relate with the story.. but liked the flow and rhyme...well done..

AFairly accurate reading of Punch and Judy and of kids, who do like it rough and tough and gory--like their world.

I really enjoyed the rhyme and rhythm of this piece.

For your exuberan "Blog" I have one quibble--goths, and I presume we are talking of the that pop cultural phenomenan at the end of the twentieth century, not the third century B.C. Germanic tribe that would split into Ostrogoths and Visigoths, were remarkably peaceful.

It was just the world around them that feared them due to their obvious visual differences (upswept hair, eye makeup on men and women, and Model T Ford colour schemes...).

Otherwise, a lovely find on a 3WW stroll.