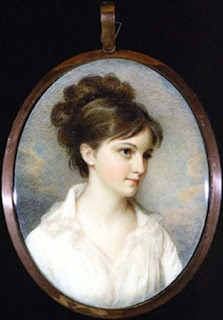 GIRL WITH COURAGE!
(The story of how Indigo saved Carolina.)


A charming portrait; a charming face; such feminine perfection!
A dear sweet child of former days, from a miniature collection.
But no, this is no dainty doll, dressed up in frills and lace!
Look at the firmness of the chin and see an heroic face!
Eliza Pinckney, though so young, appears to know her fate;
That she will be a heroine and even save a State!
*
Born in the West Indies in seventeen-twenty-two,
And educated in Britain, when girls' chances were few,
She moved to Carolina, with all her family,
Where her father owned plantations, and his future seemed to be.
Sadly, her mother died quite soon and her father had to leave,
Being recalled to Antigua, and she was left to grieve.
At the tender age of sixteen, Eliza was left in charge
Of three plantations, siblings, slaves! Her burden was so large!
Remember she was just a child, and a female one at that!
What a responsibility that girl was looking at!
*
But  Eliza did not wring her hands and ask the sky 'Why me?'
She simply did the best she could to fulfill her destiny.
She rose at five, attending to the work she had to do;
She taught her siblings how to read, and her slaves were tutored too!
She read her books on botany, a constant fascination,
And even took music lessons as a form of relaxation.
*
Rice had been the main crop on nearly every farm,
But now the rice was failing, causing worry and alarm.
The Carolina farmers simply could not contemplate
A decline in all their fortunes, a decline in their great state.
Considering another crop, she thought of indigo,
Carolina was like Italy, where it was known to grow.
Indigo was a useful dye in the burgeoning textile trade,
So at seventeen she sent for seeds and all her plans were laid.
In spite of several set-backs, she firmly stood her ground,
And her indigo soon flourished and was famous all around.
She encouraged local farmers to plant more indigo,
And the state of Carolina went on to grow and grow.
*
And when she died at seventy-one her legacy lived on.
Her contribution to her state was great though she had gone.
Indeed, George Washington himself was pall-bearer when she died,
For she was a doughty heroine and Carolina's pride.
*

Another famous lady here:
http://rinklyrimes.blogspot.com/2009/02/315-brown-beauty.html
Posted by Rinkly Rimes at 6:50 AM

Eliza Pinckney should be an inspiration for all women. What an outstanding lady.

She certainly was a lady, strong willed and determined. Good for her, she was way before her time. Most would have done just that, saying why me and doing nothing.

What a lovely bit of history written in rhyme. Thank you for the education!

LOvely girl. And a nice piece of history.

Fabulous - and thank you, you have told me about somone I had never heard of :)

well that makes me ashamed of my little fear of spiders! I had never heard of Eliza either - what a great tale. Thanks you for sharing it, Brenda!

Interesting poem! I never knew heard of Eliza either. Thanks for teaching me something new!

wow, i did not know of this woman and you have educated so well with your verse...lovely piece on Indigo..will always associated her with it now...bkm

That was a fabulous post ... i had to spend some time googling her and read more ... what an interesting life ... what a progressive woman ... thanks for the history in poem!!!

Thanks for sharing this rhyme about an incredible individual. I'd recently read about her story. My post today is also on indigo dye and an artist from Nigeria.~ Sarah

This was AMAZING. I love learning history, especially through personal stories like this. WONDERFUL verse to tell us about a spectacularly brave and industrious woman.

I learn something new each dayin blog land! Thanks for sharing this inspiring story. Great idea for today's post! Anne

a portrait comes to life in your words...
lovely written.

People Who Know Me Would Say: said...

I live in South Carolina. This wonderful post taught some history about my part of the world.

What a fascinating story and a wonderful link to Rainbow Summer Schools Indigo!

I knew nothing of this tale but I found it quite fascinating.

Thank you for sharing it with us.

And thank you for linking to Alphabe-Thursday.

Great post and thanks for sharing with us, do beleive this is the sort of things they should teach more of us in school.