Recollections of a River 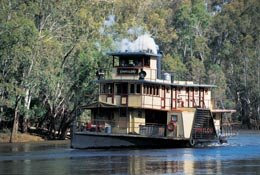 MY WORLD
http://showyourworld.blogspot.com/2009/06/new-myworld-tuesday-coming-up.html
The Murray-Darling Basin is frequently in the news here. It's the third longest river in the world and it has been of enormous importance to Australia, having made the surrounding countryside our 'Breadbasket'. In the top picture you can see a past Prime Minister proclaiming its great future! But Drought, whether caused by Global Warming or not, and Salination are threatening the once-mighty river-system. A friend of mine, who worked on the River in his boyhood days, recalls better times.
RECOLLECTIONS OF A RIVER.

It isn't quite the Amazon, it isn't quite the ,
But the name of the Murray River once made every Aussie smile.
For the , that we hear of in the news,
Is still our country's breadbasket, something we'd hate to lose.
And we're losing it, dear reader, every day we hear about
How the is succumbing to the drought.
Droughts are fairly common but this one seems to hint
That the stark words 'Global Warming' are not something just in print.
So we're growing quite nostalgic about days that used to be,
When the much-loved flowed majestic to the sea.
It's water wasn't crystal clear; it flowed in murky browns
And some settlements it visited never qualified as towns.
But it watered land for miles around engendering fruitful farms,
And its bounty and its bustle were but two of all its charms.
Far and wide we sent our produce; it was seen on foreign shelves,
But now we sometimes wonder if we'll even feed ourselves!
*
My old friend, Alf McKinnon, plied the river as a lad,
And he often talks about the wondrous voyages he had.
Don't go thinking 'Show Boat', it wasn't quite that swell,
But the boats that plied the river had a million tales to tell.
They carried cargo up and down, wool was the chief export,
But they also carried household goods and fruit of every sort.
Two thousand miles of River , with its water flowing strong,
And the Rivermen in full voice as their vessels chugged along.
It wasn't simple sailing, there were rocks and sunken trees,
So they often shouted warnings seeing dangers such as these.
They stopped at every settlement; their social-lives were great,
For every time they made a stop they met-up with a mate.
No wonder Alf's nostalgic about the time that's gone.
And all Australians hope the River Murray journeys on,
On into the future, flowing high and flowing free,
When drought and salination are just ancient history.

A river nearer my home here:
http://rinklyrimes.blogspot.com/2008/12/223-nothing-could-be-finer.html
Posted by Rinkly Rimes at 1:21 AM

I do hope it survives Brenda. Your poem is a great tribute to it and the people who work on it.

This is certainly a beautiful river. Where is it located? My husband and I are thinking of taking a trip to Australia next winter, and we would need to see this in person.

Hello, thanks for dropping by, very true, love the way you projected the story, great poem... have a great day :) cya MonikaRose