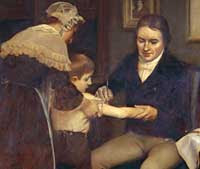 A Tribute to an almost unknown lady.
VACCINATION'S HEROINE

Sir Edward Jenner, here portrayed
Found that he had made the grade
When first he practiced cow-pox vaccination.
His is a really well-known name,
Praised in the annals of great fame,
One of the heroes of the British nation.

Now these are Turks. It's a disgrace
That they can rarely claim a place
In all the annals read on vaccination,
For they had practiced the great art
Throughout their history, from the start
And we should be so grateful to their nation
*
Ambassador, Lord Montague,
Sailed with his wife (all this is true)
To represent his King in distant parts.
The Lady Mary did good works
Among the peasantry, the Turks,
And she learned their local customs and their arts.
*
She found that small-pox, which was rife,
Sometimes threatened another life,
Unless they'd come in contact with a case.
The Turks made sure that pus from sores
Entered a healthy person's pores,
Although the process wasn't nice to face.
*
Lady Mary sent the news
To England, giving them her views
That, in this way, much death could be prevented.
Her own young son was treated thus,
Although I'm sure he made a fuss,
And so the modern process was invented.
*
Edward Jenner went ahead
Using cow-pox germs instead,
And, sure enough, the smallpox germ retreated,
And all the British people cried
'Without a doubt he's Britain's pride!'
And down through time this cry has been repeated.
*
But let us not forget to praise
A lady and her learned ways,
Who had to live with no appreciation,
And all the Turks who went before
Who, also, should be praised much more,
And who gave us all the boon of vaccination
*
A quote from a letter written by Lady Mary Wortley Montague
'There is a set of old women, who make it their business to perform the operation, every autumn, in the month of September, when the great heat is abated. People send to one another to know if any of their family has a mind to have the small-pox; they make parties for this purpose, and when they are met (commonly fifteen or sixteen together) the old woman comes with a nut-shell full of the matter of the best sort of small-pox, and asks what vein you please to have opened. She immediately rips open that you offer to her, with a large needle (which gives you no more pain than a common scratch) and puts into the vein as much matter as can lie upon the head of her needle.'

I very much enjoy your rhymes that educate. I think it is fascinating how many people in history get credit for knowing how to capitalize on someone else's genius!

What an absolutely fabulous history lesson!

The vaccination sounds so crudely done, but I suppose in those days the prospect of getting smallpox was the worst alternative.

How fascinating. I think its amazing how things are discovered and I am so thankful for the vaccinations and vaccines.

We are familiar with the Jenner's vaccination story but never know that the original information of the practice came for Lady Mary. Thanks.

Very interesting. It does not surprise me that the lady was given no credit.

What a MARVELOUS way to present history! I can't wait to share this poem with my boys!

Wow .. well, I for one didn't know that! And your poem is, as usual, faultless. I really enjoyed that!

That's a really great posting. Do you send your poems to schools? I'm sure they would make great lessons.

Have to say I've only ever had this vaccination once when you had to get them to go to Spain (many years ago!) It was horrendous, I was ill after it and what a scar it left.

I've had no more vaccinations since. Now I never go to countries where you need nasty jabs.

Absolutely fascinating how you manage to rhyme and rewrite snippets of information - what fun you must have.

Ooooooooooh I loved this one Brenda!

You could consider naming your blog as WikiBryantics.

A wealth of info indeed.

I learned something ehre! And enjoyed learning it through your rhyme! Thanks!

Thank you for this wonderful lesson in history, and I'm sure, as you say, there are many, many more who never received the credit they deserved. I enjoyed this very much. :)

Fascinating story. And cleverly retold.
Thanks for including the quote from the letter.

i am a fan of historical stories, and this is excellent!

A wonderful tribute indeed, for without them where would we be?

I love the history here!