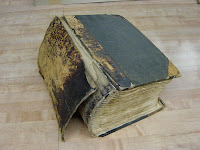 CARRY ON TUESDAY
http://carryontuesday.blogspot.com/2009/06/carry-on-tuesday-4.html
is a new meme-group to me.

The idea is that one is given a quote (here in blue) and builds on it. How delicious!

These words are the opening words of 'Possession' by A.S. Byatt.
LANGUAGE BARRIER
The book was thick and black and covered with dust.
Its boards were bowed and creaking
I opened it because I felt I must;
I sensed that here was something I was seeking.
Inside, a diary entry pale and faded,
In a language that I could not understand!
It lay like a secret life invaded,
And the language difference meant that I was banned.
I closed the boards, a cloud of dust went flying.
I rose and left the room feeling quite low.
Those words had hinted of some theme undying,
But what it was I now would never know.
Another language barrier here:
http://rinklyrimes.blogspot.com/2009/01/269-accent-on-accent.html
Posted by Rinkly Rimes at 1:19 AM

Lovely and the photo accompaniment works so well.

This is really lovely. You must try to get it translated!! Thanks for joining in. I hope you'll return next week.

Intreresting twist. Leaves us all wondering and hanging. You are a devil my lady. I loved it.

I enjoyed wondering what your language looked like and sounded like. Maybe someday the book will be re-opened and understanding will fly out.

poets continue to cause me great envy

Now my curiosity nerve is twanging! Hope you will add to this - great read :)

Please don't worry Brenda, probably it's a book no one ever read..!!!