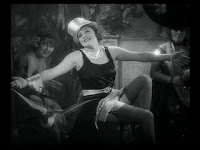 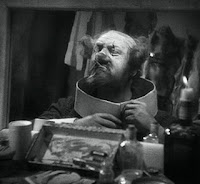 EVERY PHOTO TELLS A STORY
http://everyphototellsastory.blogspot.com/2009/06/photo-prompt-clown.html
Exhibits a photograph of a sad clown.
I am reminded of a very old film which made a great impression on me.
In the story, Professor Rath (Emil Jannings) is a professor, a respected man of high stature in his local German city, and his position commands respect from his peers and fear from his pupils -- for him, it defines who he is. When he falls for Lola-Lola (Marlene Dietrich), the cabaret singer/dancer, he forsakes his position in society and enters into a free-fall plunge that can only end in his own destruction.
THE BLUE ANGEL.
A sad clown? Was there ever
A clown as sad as he?
Or was I just impressionable,
As young girls are wont to be?
It was my very first 'foreign film';
To me it was exotic,
The black-and-white of the images
Made it the more hypnotic.
Then there was the music,
And a language quite unknown
And a certain air of decadence
Added a suggestive tone.
Marlene Dietrich's German
Sounded ribald and compelling
And her gaudy giddy life-style
Made the story worth the telling.
But it was the tragic professor
Who caused my flesh to creep.
I could hardly bear to watch him
As he got in far too deep.
And when he finally went mad
When they broke eggs on his head,
And began to crow like a cockeral
I viewed the screen with dread.
Even now I get goose-pimples
Just remembering it all.
How a worthy man became a clown!
How love came before a fall.
A much less heart-rending clown here:
http://rinklyrimes.blogspot.com/2008/09/119-cherry-nose.html
Posted by Rinkly Rimes at 6:59 PM

How on earth did I miss all the posts on this page? I thought I checked in every day. You are so prolific and I am in awe of your talent that seems to be a bottomless well.

I love the way you think - so clever.

I've seen this in two versions( German and English ). As pathetic as the professor was, I still felt a bit sad for him, at the end. Very cool that you can do a poem around a film screening :)

How love came before a fall.

So sad for the Prof.

He should've tried to 'rise in love' instead of 'falling in love' :)))