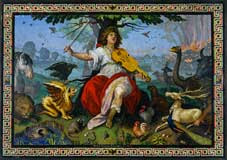 Orpheus and Jesus, they are the epitome
Of religious assimilation, as anyone can see.
*
Orpheus is a myth, of course, and from Ancient Greece he came.
He was considered beautiful and everyone knew his name.
He was a great musician who could tame the wildest beasts
And therefore he was worshipped with dancing and with feasts.
Eurydice was bitten by a snake and then she died!
Orpheus was devastated for she was his bride.
Down into the Underworld Eurydice was taken,
To sleep forever in the dark; nevermore to waken.
Orpheus went to the Underworld and sang his lovely songs
And Hades said 'Yes! Take your wife back to where she belongs.'
So his wife was resurrected, awakened from the dead,
And she returned to the living world, the bright world overhead.
*
When Christianity appeared, then came assimilation.
Pictures of Orpheus were admired, objects of adoration.
These paintings gradually displayed Jesus in like manner
The people expressed their worship then by crying a loud 'Hosannah!'
The story of the Underworld and Eurydice's return,
Were woven into the Christian theme for everyone to learn.
The idea of resurrection was carried on as well,
And, too, the thought that, down below, was a dreadful place called Hell.
*
Now further proof of the cross-over has recently been found;
A Talisman of Orpheus, that continues to astound.
This Talisman is ancient, pre-dating the Christian era,
And it makes assimilation theory, more reasoned and much clearer.
A cross is very clearly seen, a symbol of crucifixion,
And scholars have been studying this old pagan depiction.
*
All around on every side are signs of assimilation,
Not much in life can prove to be a totally new creation.
*

The strange Talisman
Posted by Rinkly Rimes at 10:34 PM

ahh and i m always in for a surprise when i come here :)
thank you!

A really interesting lesson in verse!

Loved your post, and the theme... religious assimilation has had a humongous effect on how the political world turned out to be..

Duh! Found it now! I enjoyed that insight. Thanks.

WOW! this is quite a lesson

Perfectly formed and told - it tells far more than words...

In Ad 325, the Roman Catholic Church was created by a pagan emperor named Constantine. It was only superficially a Christian Church. The First Nicean Council was assembled to work out the details. While it was supposed to have been made up of Christian elders from five major Christian centers (Rome, Athens, Alexandria, Jerusalem and Antioch), it also included elders of all the major Pagan religions of Rome. Bishops from the cults of Mithras, Tammuz, Oannes (Dagon), Ceres, Janus, Bacchus, Apollo, Osiris, Jupiter, and Constantine's own religion: Sol Invictus, were invited. It was Constantine's wish that all of the Pagan religions, then at odds with each other, creating unnecessary conflicts, be unified into one "Catholic" church. "Catholic" means universal. The proceedings of that council were conducted by Constantine with an iron hand, and one of the positions which he insisted upon, and got, was to make Pistis a doctrine of the new church. Gnosticism could not be tolerated, because it encouraged its members to question authority. Pistis was thus politically expedient, because it forbade questioning.

So assimilation in this case may have political roots.

You could be pretty right in that theory..!!

researched a bit on the Constantine's matters in http://www.rumormillnews.com/cgi-bin/forum.cgi?noframes;read=150618

Great! I love history and religion and how they've influenced each other. And your lesson is so wonderfully poetic!

love the tale you wrote. thank you for sharing.. my potluck is here: http://fiveloaf.wordpress.com/2010/06/19/my-whole-world/

Ooooh, rhyming religious debate... I love it! It definitely gave me something to think about. I had not heard of Orpheus and Eurydice.

Some Awards 4 you, please help by visiting 2 or 3 poets to give birthday wishes, Thanks!