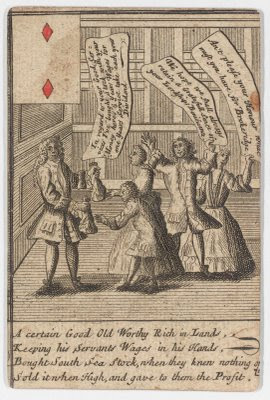 MANIC MONDAY
http://www.manicmeme.com/2009/06/hop-on-pop.html
suggests
'Pop'
And what better title for my educational treatise?
POP!
The story of the South Sea Bubble.
How could they have been so crazy? How could they have been so mad?
Believing all the stories! Throwing good money after bad!
(Replace the 'they' in the words above with the small replacement 'we';
You'll be reminded of our Credit Crunch, as you will quickly see!)
*
In 1720 old England was at war with France (what's new?)
And the Government was in dreadful debt and didn't know what to do.
It borrowed from the South Sea Company, the interest rates were high,
And soon the general populace caught on to this 'pie in the sky'.
Shares rose to ten times their value, going up every day,
And everyone was delighted to get rich in this easy way!
All manner of crazy companies suddenly appeared,
Some of them unbelievable, crooked or downright weird.
One company to 'buy the Irish Bogs' was advertised and floated!
'Invest in square-shaped cannon balls!'; another idea quoted!
One charlatan said 'Invest in 'this', but I wont say what it is!'
The world of finance was agog with all the froth and fizz!
The wonder is people did invest! Would the madness never stop?
Of course it did, when the Bubble burst with a great resounding
'POP!'
Fortunes were lost just overnight and suicides were rife.
Servants who'd hoped to improve themselves returned to a servile life.
Hundreds of Members of Parliament lost everything they owned,
And the King, whose Mistresses were involved, was practically dethroned!
The Postmaster General took poison! The Riot Act was read!
And only Robert Walpole managed to keep his head.
He managed to save the country and is honoured for the part
He played in the shocking drama that had been flawed from the start.
*
Who would have thought such madness would, one fine day, return?
It's very clear from this story that we humans never learn!
*
More mind-boggling finances here:
http://rinklyrimes.blogspot.com/2008/12/232tricky-trillion.html
Posted by Rinkly Rimes at 11:10 AM

Especially since what is happening now also mirrors Black Friday and all the surrounding financial morass! But as long as we're human we'll (most of us) be looking for the easy buck and the get-rich-quick scheme.

Hey I have another pop idea for you, how about a carbon neutral scheme, so the big industries can still pollute and they just have to pay the govt for doing it.

Life is just one long deja vu, en masse and individually! A pattern that an be seen every day on a ticker tape.

It is amazing what greed can do to human beings. The one I always found insane was the Tulip craze. Once more the world will dig itself out from under the desire for more, more more.

Thank you for the lovely jazz version of "It Might As Well Be Spring" ... singing along and feeling gay in a melancholy way.

And we always have to pay the price of greed! :)