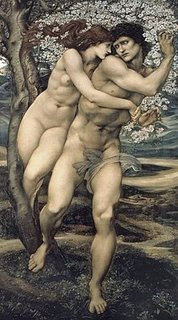 
FORGIVENESS!
This gentleman's expression is certainly revealing.
It's clear that he is suffering some very violent feeling!
The title means 'Forgiveness'! But who's forgiving whom?
He looks just like a person who is going to his doom!
He's clutching at a blossom! She's growing from a tree!
There's something very fishy here, or so it seems to me!
What will be the next move? Will she soon reveal her feet?
And will his expiation, through that movement, be complete?
I get the feeling nudity was the artist's main concern.
He had to have a reason to give naked flesh a turn!
He couldn't just paint lovely bodies for the sake of art!
Victorians were determined that morality played a part.
'The Tree of Forgiveness' needs research..........
Ah now I've found a clue!
We're back in ancient Trojan times and all that ballyhoo!
She's a Princess; he went to war and dallied 'over there'.
She killed herself because she felt he didn't really care.
After her death she then became a lovely almond tree.
When he returned the tears he wept woke her and set her free.
So she's clearly going to forgive him! Well, well! Lucky him!
If I were her I know full well his chances would be slim!
'Stuck in this silly tree!' I'd say 'While you were off cavorting!
Such behaviour's beyond the pale! I wouldn't call it sporting!
Dry your stupid eyes!' I'd say 'And get away from me!
Compared with a lifetime spent with you I'd rather be a tree!'
Posted by Rinkly Rimes at 6:53 PM

I too studied the picture and wondered! But there was no wondering about your words, as ever you brought the picture alive. I wish I could hire your talent for a day.

Is that Roger Whittaker I hear?

Hi, thanks for visiting me and leaving your calling card. Now, your take on the painting is marvelous. You do have an interest in this. I say forgiveness is too harsh a title. Maybe: Confusion?

The artist knew the story of Adam giving Eve a rib; Is he sorry now? Too late I say. Too late for the architect too.

Or, are women apologizing for what? For being women?

See what you started? How about that?

Oho oho oho that's what you'd tell a returned warrior from a battle who didn't have time to send emails to his beloved ?????

if he had read this poem, probably he would've got into the tree trunk and zipped himself up :)))))

Brenda,
I do like your 'take' on forgiveness.
Very well demonstrated with words and image!

Well, if this is Adam and Eve, she is certainly hanging on to HIM for dear life. An interesting take on the forgiveness theme.

LOL That made me laugh. "I'd rather be a tree." Very interesting and entertaining.

this makes me smile,
fun take,
a pleasant read.

what an engaging, amusingg tale. you wrote it so well. indeed, i would rather be a tree than accept him back. :)

I love your interpretation! Me, too I rather be a tree, then live with distrust~ No, I rather he be a tree!