BRY ANTICS
June 28th
This week has been dominated by World News, chiefly by the continuing problems in Iran, and by the death of Michael Jackson. Regarding the former tragedy, I am reminded of the era when the Shah was deposed, the big difference being that the eyes of the world are on such siuations these days. As for Michael Jackson, he always seemed like a child in some ways (though amazingly mature in his talent.) Since he never had a normal childhood, I think he was more to be pitied than blamed for his bizarre behaviour and the world has lost an enormous talent.
The Australian news was dominated by a row in Parliament over a forged email. The subject of this was the possibility that the Treasurer had arranged special favours for a 'mate', but the email proved to be false and insults have been hurled backwards and forwards all week. Locally, we have had the sad case of a seven year old autistic girl being starved to death by her parents. I can't understand how the authorities and the neighbours allowed such a dreadful thing to happen!
I have had a busy week. Last Sunday I took part in a classical concert at Morpeth, a little country town in the Valley. It was almost entirely instrumental and I think I was asked along as light relief. Even so I toned-down my program and included some serious items. I presented my poems from the lectern, which felt a little odd. My father would be turning in his grave! Here we are taking our bows and receiving our gifts. 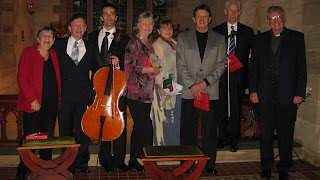 We had our monthly Probus meeting on Monday. The Guest Speaker was a Lecturer in Photography from the University. He's had several books published and his talk was about taking photographs in Mexico. No doubt his shots are very artistic, but a lot of them were intentionally blurred or misty to add a sense of urgency and I must say I would have preferred something a little more conventional. I'm showing my Happy Snaps next month and they'll be very different! In the afternoon we had Choir Practice and Lois and Pam agreed to our using folders in future so that was a small victory!
On Tuesday I had yet another brush with religion when I did an hour's Poetry Reading for the Cathedral Social Group. We were in the Vestry too. I included some solemn items once again, but the members were all very relaxed. The refreshments were a disappointment as we'd had a delightful home-cooked party on Sunday and this was a cardboard-cup affair which I didn't expect!
On Wednesday we went by train to Woy Woy on the Central Coast, to visit old friends, Fran and John. John has been ill for months so we were pleased to see him looking improved in health. We went early so I could take some photographs of the area. The weather had looked dreary on our way but it absolutely sparkled when we got there! 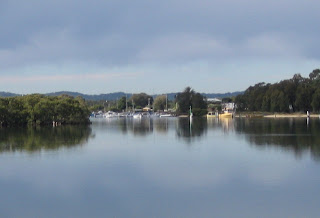 Malcolm took the photo of me below while we were there. Note the red jacket. It's my new winter warmer. It makes me feel very cheerful and I'll probably wear it in every photo for the next three months!

On Thursday I spent the day with Rebecca and Max as usual, but this time Brian came along as he was off-duty. Max calls him 'Bum' which sounds a little odd when we're speaking to him in public because we've all latched-on to the name! 'Bum' and Max had a great time throwing stones into the water. 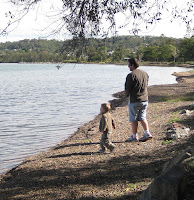 Also on Thursday I received an unusual parcel from my friend Margaret. She has saved letters from friends over the years and she decided to send mine to me, knowing that they would interest my family more than hers. Mine date from 1948, when I was still at school so I'm going to enjoy reading them bit by bit. As you can see, the parcel is quite bulky! 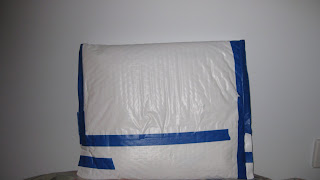 The melodrama rehearsal on Friday was a bit of a fizzer. There were several people away again  (on Grandmother duty mostly) and I'm more and more coming round to the idea that I need to simplify my plays for this group, since the logistics seem to trip us up.


Saturday was a working day. I did my Sunday chores because I'll be busy preparing Greg's birthday lunch tomorrow. I did a Big Shop and I took this photo at one of the fruit shops because I'm interested to know how prices compare. I think we'll find ours are rather high. 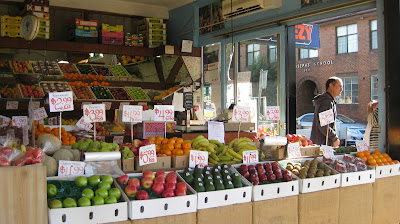 I also had to write my Secretary's report for the Speaker's AGM and re-write the melodrama we're rehearsing next week, adding in suggestions from the other 'girls'!!!
So ends another week.
Brenda
Posted by Rinkly Rimes at 6:59 AM

What a treasure those letters are going to be! They may remind you of things long forgotten, or revive an old dream, or just give you a smile at your childhood follies. I envy you the experience.

So happy that the letters arrived as well taped as I had sent them, albeit in a rather lumpy looking parcel. I sent them back to my long time friend, the writer, because they are remarkable letters - of course, more about her than me - therefore, autobiographically interesting, covering a lifetime of experiences in different parts of the world, from 1948 until the time when we began emailing instead. I don't remember at this moment when that started but, undoubtedly, another parcel will follow one day. Alas, no longer written in the beautiful handwriting that was so special to me at that time.

A busy week, for sure and a lovely gift - the letters will give you many hours of reflection and fodder for more wonderful poetry. Nice post!

I just came over to wish you a Happy Shadow Shot Sunday..

Brenda, I seldom miss reading your verse posts (although I don't always comment) but your diary is a weekly must-read for me! I'm appalled at the death of the little autistic girl.Congrats the victory of using your folders in the choir. Well done. Thanks for all the other news, I love your photos taken when you visited your friends on the Central Coast. I was admiring your red jacket in the group photo and then you mentioned it later. What are your min temps? Ours were -1 °C this week and we all went into a decline (lol!) Wow, what a lovely idea of Margeret's to send her friends their letters. What a walk down memory lane. (PS Will we see any in posts?) You are such a talented lady and I admire your style. Have a wonderful week. Regards Jo

You look pretty smart in that red jacket :)))

How nice of your friend to have preserved your letters all these years and sent them to you.

I too have my friends hand written letters. May be it'll delight them if I send it back to them..!!!