BRY ANTICS
June 21st
This week has been busier than last and I've been dogged by self-consciousness. The words 'skin cancer' will strike horror to cold climate readers, but they're everyday irritations here. Of course, I don't refer to melanoma, which is a serious affliction. I just refer to the odd sun-caused lumps and roughnesses that might develop into something nasty. They can be 'burnt off' at the doctors but many people use a cream and I'm one of them. The trouble is one is left with a fairly stubborn scab (which I'm sure you wanted to hear about!) and mine is bang in the middle of my nose! I can see that people are mesmerised by it as they're speaking to me!


Anyway, I put-up with the embarrassment and continued my social life as usual. Last Sunday we had the 'Hymnfest' at the Cathedral. I'm a non-believer, but I love singing hymns. This is the result of a very religious up-bringing, and I love some of the modern hymns which are really jaunty. Unfortunately, no members of my family came to the service! Rebecca said a blunt 'No', Greg felt exhausted by the day before's party and Malcolm went on a Car Rally. So my triumph (!) went unnoticed! Some triumph! I'd learnt the alto parts so carefully, but I was placed next to a VERY strong soprano and I ended up singing along with her! Worst of all, no-one noticed! I couldn't take photos during the service, but here we are preparing. 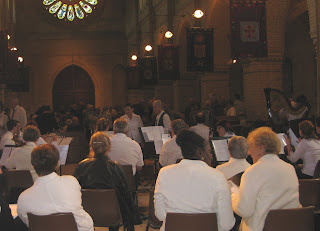 On Monday we had the Probus Committee Meeting, but that hardly ruffled my feathers at all as I just go along as 'Past President', putting my oar in only as a 'revered elder' and drinking coffee. We had Probus Choir Practice in the afternoon and I stuck my neck out requesting that we might be able to hold books rather than having to learn everything by heart! We'll see if anything comes of it! On Tuesday I had a rehearsal for my new melodrama , at my house. I've re-written an old play, making it ridiculously 'snappy (people go from embrace to death in seconds!) and adding a lot more audience involvement. Poor Malcolm was having a rest upstairs and he had to wear ear-phones to deaden the noise of shrieking laughter! In the evening the Book Group met at my house and I made a great vat of vegetable soup suitable for the wet, wintry weather. I hadn't read the book, because it concerned a massacre. Not only that but I'd spent hours reading 'Shakespeare's Wife' last month (lovely!) and I just felt lazy. We discussed the book for an hour or so. Here we are, deep in discussion. (I took this photo on the stairs.) 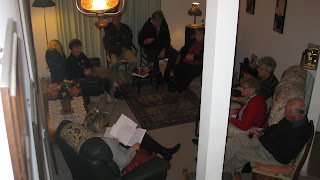 After the serious stuff the evening deteriorated (improved.) Here you see some of the supper-time hilarity!

Gwen and Joy
On Wednesday I should have gone to my Speakers' group but it was pouring with rain and I travel by bus, so I sent an apology. However, it was Scrabble Day so nine people turned up for a game. a chat and a cuppa in the afternoon. That's always fun, although we miss a very dear member of the group who recently had a 'simple' fall which resulted in knee, arm and wrist damage as well as the loss of an eye! Unbelievable!
Thursday is usually my Family Day with Rebecca and Max, but we went to a Whale Watching barbecue so I didn't get to see them. The weather was very wild still, so we didn't see any whales, but there were still intrepid surfers out there. I just copied an old poster off the wall of the Surf Club, and had a lovely meal of sausages, salad and home-made sweets. 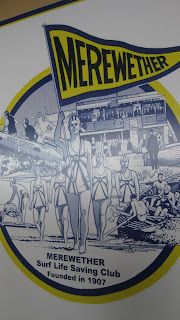 On Friday we went to Carole's to record the music for 'Jewelled Jeopardy'. I was in charge of the recorder, which worked perfectly well at home, but which went on strike at exactly the wrong time. We had to do the recordings on Carole's smaller machine and the result is very tinny. But we'll get there. I was driver today, and I hated driving home in the rush-hour. I wouldn't mind if I never drove again, actually. Blake came for his Spelling Lesson at night.He was rather slapdash today and made some careless mistakes, but he appears to enjoy the sessions! Rebecca, who is due to start her full-on tax season, was telling us that her branch of H&R Block has improved by 160%! (That's 160%!) She's being given double the staff this year. It was Malcolm's turn to prepare the evening meal but Rebecca and Blake left rather late so we had our meal up at the Club. A delicious chicken and mushroom pie!


The little flurry of excitement this-afternoon was an impromptu tea-party at a friend's house. She goes to such a lot of trouble and the mix of people is always interesting too. As you can see we were drinking our tea very weak in wine glasses! I ate so much that I wasn't able to do justice to the meal Malcolm cooked when I got home! 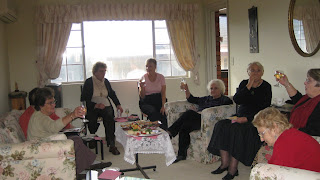 And so another week ends. See you next week.
Brenda
Posted by Rinkly Rimes at 6:08 PM

Wow! You sure can pack a lot of stuff into a week! When do you find time to write all your wonderful poems?

Brenda
I can't believe how much you have achieved in one week. You must be very energetic.
I have used the skin cancer cream but it left a white ring the size of 5c so next time I went with the knife for one of those pesky little bumps under the glasses nose bridge doovies- a very common place they told me...and it left a scar! but it was a nasty variety of skin cancer even tho was only the size of a flea! So it had to go...

Rest up tomorrow for you new week ahead. Is it going to be as busy?

Hi Brenda;) I've been away and had to scroll right down on my followers list to find your diary. I wasn't going to miss it and am I glad I didn't. I enjoy seeing what you do in a week. You have such interesting things on your agenda and I love reading about it. I love that your hubby has a turn to cook. Mine does too when he's home and has just made a delicious curry for tonight. The perfect meal for the icy, winter weather we're experiencing! Thanks for sharing.

A packed and interesting week indeed.

Wow... Malcolm is good at cooking?

Luckily I am not. And my wife doesn't trust me to cook and she to eat that :)))