SUNDAY SCRIBBLINGS
http://www.sundayscribblings.blogspot.com/
suggests an item about a
'TOY'

This is about one I never had!

I never had a Shirley Temple Doll!
That's why I'm such a crazy mixed-up pensioner!
Shirley Temple was the icon to extol.
I still go weak if anyone should mention her!
For she was such a perfect little girl,
With her dimples and her pretty curly hair!
She could tap-dance, she could curtsy, she could twirl!
All in all I felt that life was hardly fair!
But if I had had a Shirley Temple toy,
Some of the magic might have come my way.
And so I tried out every female ploy
Nagging my parents each and every day!
'All the other little girls I know have one! It's true!
I'm the only one without one that's for sure!
If I don't get one I don't know what I'll do!'
On and on I'd go with many an encore!
So my Mother bought a 'Shirley Temple' dress!
It said it on the label at the store.
So, in a way, I had a small success.
Though it never really evened up the score.
My life has been deprived, as you can see,
And I very nearly turned to alcohol!
Are there any others out there just like me
Who were denied a Shirley Temple Doll? 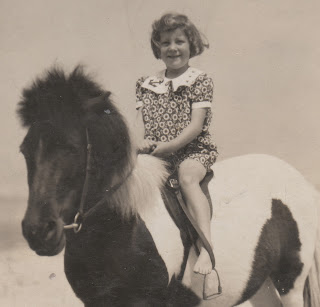 Here I am in my consolation dress!

Your poem sweetly sings. Your dress is too.

Love the picture of you Brenda. So cute. Thanks for sharing your talents.

A great picture, perfect in many ways, so very like you, too. Did Shirley Temple come before or after Elizabeth Taylor, I wonder - because to ride a horse (or is that a very pretty donkey) was another childhood wish that was never fulfilled.

This is such a reminder of the '30s. I did have a Shirley Temple doll, but I would have traded it for a pony! Was he yours? You and your dress are so cute!

Hey, at least you had a pony!! I always wanted Chattie Cathy - pull her string and she talks! I did have a Tiny Tears doll though. she slept with me and lived with all my little girl fantasies. I had her so long that her "rooted" hair had bald spots and her eyes that closed when you laid her down? One stayed open forever - kind of creepy huh?

Well you look great on that pony in your posh frock Brenda.

No I never had a Shirley Temple doll. Have to say I didn't even know they existed until I read your poem.

I was addicted to my golliwog. There I've said it. Now I'll have the PC police after me now for having racist attitudes when I was 5!

And like one of our valiant young princess Jhansi Rani on a horse..!!!