UNUSUAL UNDERWEAR!
I know you've all been waiting for this brash, bold expostion
On something very basic to humanity's condition.
Though nudity can be quite sweet on a slim and lissome figure
Underwear is suitable for the fatter and the bigger.
In fact, it's quite alluring when adorned and looking lacy,
And sometimes, on the right physique the effect can be quite racy!
Enough of that! I'm here to give a treatise on its history,
Not to allude to sex-appeal, which is something of a mystery!

Behold a lady athlete in the dim and distant days
Wearing a strophium round her chest, warding off the public gaze.
Yes, I know it looks just like a bra! Well, it was just the same.
But I have it on the best advice; strophium was its name.

In the eighteen-hundreds, so they say, the ladies favoured stays,
Which did the most alarming things to their shapes in many ways.
You can see how painful it all was  in this very vivid painting.
And special rooms were set-aside for ladies who kept fainting! 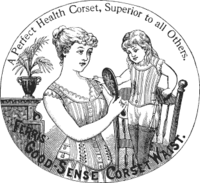 Next came a 'healthy' model, which had much more subtle boning,
Doing away with all the straining and agony and groaning.
The nether garments had a flap that buttoned-up discretely,
So 'all was safely gathered in' and hidden-away quite neatly. 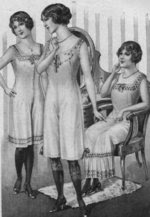 Life became much more relaxed and camisoles appeared,
'French Knickers' pranced upon the scene and everybody cheered!
Suspender belts were all the rage, showing a glimpse of thigh,
And bit by bit we ladies learned we shouldn't be so shy!

And now we come to modern times when it seems the thong is worn!
No doubt Victorian ladies would have treated it with scorn!
There's nothing left to take off! Has fashion reached its peak?
Maybe, dear friends, the time has come to turn the other cheek!
Recent, but apt here:
http://rinklyrimes.blogspot.com/2009/05/perfect-foundation.html
Posted by Rinkly Rimes at 12:26 PM

Ohmigosh, I got such a kick out of this! U are great!

Marvelous! And very witty. Thank you for such an entertaining post.

I'm shocked, SHOCKED! OK, I'm not. One of the most enjoyable U posts I've seen.

Very enlightening; I know very little of these things!!! A delightful and entertaining post.

Bravo! A history lesson and cheeky rhyme in one!

Underwear as it has never been treated before - marvellously! I thinl we men have lost something ;-)

Love the pictures and the rhyme
Can always rely on your witty last line.

I think I'll vote for the "18th Century product" Ooops, I hope none of my friends see what I'm voting for :))))