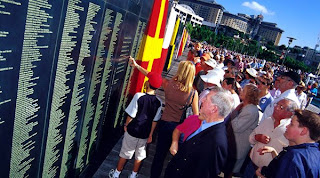 ONE SINGLE IMPRESSION
http://onesingleimpression.blogspot.com/2009/06/prompt-68-walls.html
suggested
'WALLS'
Here's my special one.
WANDERERS' WALL
In Sydney there's a Wall, where the shipping fleet arrives,
It's put there to commemorate the many thousand lives
Of immigrants who've entered this country over time,
And the area where it's built is designated 'Maritime.'
This country welcomed many people after World War Two,
For the population was so small and there was work to do.
Great dams were built by these people, they made this land their home,
Although some yearned for Athens and some others yearned for Rome.
Then the 'Ten Pound Poms' arrived, for that was the fare they paid,
All the way from Britain to sustain Australia's trade.
People like us, from Africa, came later in the piece,
And still the tide keeps coming; it will probably never cease.
We've paid to have our names there, in the hope that the family
In years to come will visit the Wall and consider what used to be.
A wall of a very different sort here:
http://rinklyrimes.blogspot.com/2008/08/89-my-wall.html
Posted by Rinkly Rimes at 4:58 PM

What a neat piece of history! I completely understand why you've put your names there.

Brenda, at first glance on my reader, I thought this a war veteran's wall. Then I read your verse. Very interesting piece of history. Too, a good research base if one has names to work with, yes?

That's a wonderful narrative poem that taught me quite a lot. A worthwhile investment, to be sure!

The writing is on the wall - right? Who built Australia :)))