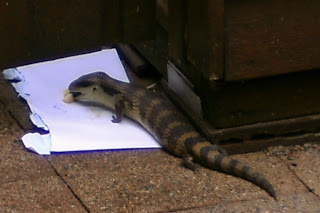 MEME EXPRESS
http://memeexpress.blogspot.com/2009/06/nature-photography-day.html
celebrates
NATURE-PHOTOGRAPHY-DAY
I'm not sure whether my subject qualifies because he's so tame!
Many of my English friends say they'd hate to live in because of all the creepy-crawlies and man-eating beasts! This photograph will do nothing to encourage them to visit us! Charlie lives under our shed and he's our pet. Not that we stroke or cuddle him! But he keeps our yard free of bugs, and his Blue Tongue, not seen in this photo, is gorgeous! The poem is, of course, my fairy-story!
What follows is a passage from an Australian website.

Did you know that in many parts of NSW, we're fortunate to share our backyards with one of 's largest lizards? That's right! And with its sleek body and bright blue tongue, you're sure to know it if you see it. It is, of course, the blue-tongue lizard. If you're lucky, you may find one sunning itself on your garden paving on a warm day, or sheltering under a rock or log when its too hot.They're beautiful visitors in any yard. And the great thing is, blue-tongue lizards are useful too. They help eat the snails, slugs and caterpillars that attack your favourite plants.

There once was a Dinosaur, massively large,
It could roar, it could chomp, it could gnash, it could charge.
It was tall as a tree, it was wide as a house;
A cow, by comparison, looked like a mouse.
All the creatures ran screaming when he came in view.
And the Dinosaur, puzzled, said 'What did I do?'
He tried to make friends, yes, he honestly tried,
But they all ran away from him, quite petrified!
'You're too big!' they all yelled. 'We feel threatened by you!
Go on a diet! That's what you should do!'
'But a diet won't help me! The faults in my genes!'
Cried the Dinosaur 'I must just find other means!
It's my bone-structure! That's what all dieters say.
How can I slim down? I've the wrong DNA!'
Now a Fairy was passing and heard him complain,
For a Dinosaur sigh is as loud as a train.
She was delicate, gauzy, a fluttery thing,
Of the type we have often seen dance in a ring.
'Of Dinosaurs I am tremendously fond!'
Cried the Fairy while waving her magical wand.
'I'll transport you in Time over millions of years,
And the life that you'll live will soon dry all your tears.
You'll be dainty (well, almost), you'll even have charm,
And people will know that you'll do them no harm.'
Now mention of 'people', not heard of before,
Made the Dinosaur give a perplexed sort of roar.
'Trust in me' said the Fairy 'I'm shrinking you too,
But people will still understand that you're you.
Are you ready to go?' He replied 'Yes, I am!
I hate being huge! Get me out of this jam!'
One wave of the wand and he travelled through time,
From a world full of ferns, and a primeval slime,
To a world full of 'things', such as oil-drinking cars,
And people, who looked just like creatures from Mars.
And what was the greatest surprise of them all,
Was that all of the people were terribly tall!
For the Dinosaur now was the size of a ferret,
A fact that he noted was not without merit.
He also discovered his tongue was bright blue!
(He was proud of this feature because it was new.)
At first he looked round with a vague sort of dread,
But he finally found quite a cosy old shed.
It was dark underneath it, as one would expect,
And full of dead leaves, the result of neglect.
He decided to hibernate, right there and then,
And come out in the Spring to a world full of men.
In due course he came out, looking quite a lot thinner,
Looking here and then there for a titbit for dinner.
'Come and look!' called out Malcolm 'We've got a new pet!'
So he came and lived with us, and he's with us yet.
From now on he was Charlie, he'd got a good name,
And he was so thrilled to be treasured and tame!
A home and a dinner! Now, wasn't he clever!
And I think he will live here for ever and ever.


(And the name of the Fairy who caused this solution?
Her first name was Eve; second name was Olution.)


The reason Charlie is hibernating right now here:
http://rinklyrimes.blogspot.com/2008/07/57barrington-snow.html
Posted by Rinkly Rimes at 11:23 AM

How wonderful to have a dinosaur all your very own!

How imaginative you are . . . . and what a name for your creature!

and these fairies somehow mess up the wishes made..!!!

I adore these little guys. I recently went to the reptile place here in Canberra to have a look and was lucky to be there at feeding time. The guy there said they mostly eat vegetables and the bugs and snails are secondary in their diet. They were being fed lettuce grapes and carrots etc which they were munching happily which was a surprise to me.