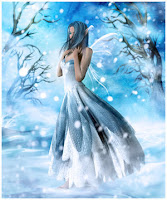 Once upon a time there was a husband and his wife;
They loved each other dearly and they had a happy life,
But, sometimes, they felt rather sad and doleful and alone
For they didn't have a little son or daughter of their own.
Their neighbours all had families to cosset, love and hold;
Friends said 'You'll be so lonely when the two of you are old!'
They kept their secret sorrow buried deep down way inside,
But many times, at eventide, they just broke down and cried.
And then, one day, the snow came down and settled all around
And, all at once, they had a thought as they saw it on the ground!
'Since life's unkind' the husband said 'Let's make a child from snow!
At least we can pretend, my dear, and only we will know'.
They scooped the snow and built it high as a young child might be tall;
And then they fashioned arms and legs, and a body neat and small.
They made a face, sweet as can be, and even fashioned hair.
And the wife was heard to murmur 'Never child has been more fair!'
When she was done they lifted her and carried her indoors.
Where she stood in all her glory on the cottage's stone floors.
And, suddenly, oh joy of joys, the girl began to stir,
They heard a sweet voice murmuring and knew that it was her!
She stretched, she yawned, she sighed, she coughed, and, finally, she smiled!
Their little daughter from the snow had become a living child!
The neighbours' children welcomed her when they all came around,
For she was a delightful girl as everybody found.
No weather was too cold for her; she revelled in the snow,
Although her cheeks remained so white when theirs' began to glow.
They skated, went toboganning, built snowmen round and fat,
And the girl ran round in flimsy clothes, without a scarf or hat!
Then came the day when soil showed through where icy wastes had been,
And on the leafless trees appeared the smallest tinge of green.
The skies grew blue, the breeze grew warm, the sun shone every day
And everyone rejoiced because the Spring was on its way.
All except one certain child who bowed her head and cried.
Her parents said 'Poor little one! Something inside her's died!'
Then, one Spring night, some soldiers marched along the village track
A troop of snow-white soldiers! 'We have come to take her back!
We are the Snowflake Army! She dare not disobey!
Come little Daughter of the Snow, we must carry you away!'
They swept her up and carried her far into the mountain tops,
Where the snow is deep and bountiful and winter never stops.
Summer came to the valley and the fields were bathed in light,
And every living soul rejoiced because the sun was bright.
But in one house such anguish reigned, such bitter grief and woe,
Because, forever, they had lost their Daughter from the Snow.
But summers end as summers do, the air grew harsh and chill
And one wild night the couple heard a scratch at their window-sill.
'I have returned!' their daughter cried ' I love you, never fear!
And I will winter here with you during this and every year!
But when the air grows warmer and the flowers begin to grow
Then you must say a fond farewell to your Daughter from the Snow.'
And so they lived throughout their lives, unhappy in the sun,
But their winters were a time of bliss until their lives were done.

Wonderful stuff and so realistic. In fact I'd call it a real but frosty gem and a pleasure to read.

This would make a lovely story book, it reads so well!

Oh I love your retelling of this story in rhyme! Here you have another children's book! Have you a publisher?

Sounds like a variation on the theme of Persephone!

My mother's daughters (also called Sisters :))) come home only every three years or so..!!!!