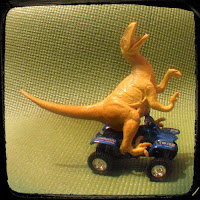 My grandson, Harry, told me a story yesterday, and I thought he would like to see it 'published'. He's five next week and this is the very first story to come out of his head!
THE DINOSAUR'S BIKE
by Harry Bryant
Once upon a time a dinosaur lived in the jungle with his Mummy and Daddy. They were called Mr and Mrs Tyrannosaurus Rex. The little dinosaur was called King and his baby brother was called Chree. One day King was looking sad. 'What's wrong?' said Daddy. 'I want a bike' said King; 'Please can I have one?' Mummy and Daddy thought about it and decided to go to the supermarket to buy one. They had to walk, and so, on the way, Daddy pulled down trees with his long rope. They had to take Chree because they could not leave him at home.They put Chree in a special cage outside the shop. It had a Nanny and a slippery-dip in it and it wasn't too hot because they got the hot air out of it. The supermarket was a special one for meat-eaters. The plant eaters had a shop of their own so that the dinosaurs like Tyrannosaurus Rex couldn't eat them.
Mummy and Daddy and King went into the bike shop. They looked at the plastic bikes. Although there weren't many people in the world then there were some who could make plastic. King saw one he liked and he said "Can I try it please?'But the shop-man said no trying-out was allowed.The bike looked the right size so they took it outside and went to get Chree. When Chree saw the bike he pointed at it, because he couldn't talk. Mummy said 'Chree wants a present too'. So she went back into the shop and bought Chree a teddy-bear. Chree was very pleased. Then they all walked home through the jungle. King was able to carry his bike because it was plastic not wood. When they got home King tried the bike and it was just right so he went for a ride with his Daddy.
Grandma's Poem.
Harry has stories inside his head.
He can dream them up when he lies in bed!
There are thousands and thousands between his ears!
I'll be reading them all for years and years! 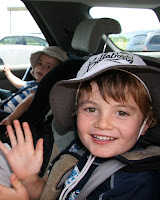 The Author with little brother, Max.
Another poem about Harry here:
http://rinklyrimes.blogspot.com/2008/06/28-basket-case.html
Posted by Rinkly Rimes at 12:43 PM

Fantastic imagination! The young Harry my well bode to be quite a story-teller. Mayhaps he's inheirited it?

This is a very good story for a 5 year old! It has a beginning, a middle, an end and continuity. He is quite the budding writer!

Obviously and author in the making...

A Grandson who'll do proud to his Grandma one day.