A quieter week than last. At the start of this year I decided to cut-down on my activities, because they took time away from writing and blogging! I ended 2008 as President of my Probus Club, Treasurer of my Speaker's Club, and Organiser of Lemon Drops Programs. (This last involved booking shows at nursing-homes etc and coping with cancellations etc etc!!) I'm much more free now, although I'm still very involved with my choir and melodrama groups. Not as a King Pin, though, I'm happy to say! So this week I was able to spend a lot of time re-writing a melodrama called 'Vile!', so that it involves more audience participation, and preparing a Photo Show for Probus. (I've been snapping all and sundry for eight years and now I'm going to let them have a look at themselves, to a verse commentary, of course!) My involvement with a local sax player, in connection with Folk Tales, seems to have stalled somewhat; he's heavily occupied with all sorts of projects, often coming over to America to play, and I think I've been put on the back-burner, after his initial enthusiasm. Still, Greg, my son, told me to expect this.
Rehearsals for the Hymn Fest have taken-up quite a lot of time this week. We rehearsed in the Cathedral, which was rather bleak, foot-wise, but lovely to sing with organ and orchestra. 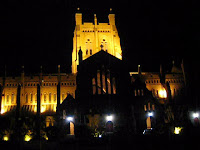 And we've also been rehearsing 'Jewelled Jeopardy'; music only this week. Other than that my week has involved quite a lot of housework. That, and worrying about Iran! For a while I thought the tide might be turning, and that we might have only N. Korea and Israel to trouble our world, but it seems I was to be disappointed. We were also involved in a solar drama. A friend in the solar panel business emailed us advising us to book for a free system quickly. He obviously knew what was coming! The Gov cancelled the freebies the very next day! The scheme was proving too popular! However, we'd got our application in, so we'll see whether it will be honoured.
Family-wise, Harry's fifth birthday has featured prominently. Greg and Michelle had organised a jumping castle for the event and this proved to be a godsend! He'd also prepared games, but the children were so happy leaping about (and eating) that only Pass the Parcel was 'done'. Harry, who is rather a volatile person, was wonderfully quiet and controlled at his own party! I think he was overwhelmed!

Rebecca and I had our usual lovely day with Max earlier in the week. (Max is R's nephew whom she minds once a week.) It was a very chilly day so we decided to take Max on the ferry. This proved to be a great success, particularly as it was followed by a shared bag of hot potato chips! While waiting on a bench in town, we were joined by a lady dwarf, if that's still the correct title. Max, on Rebecca's knee, just stared and stared. I suppose, at 2 1/2 he didn't know whether she was child or adult. It made me wonder about a child's view of life. 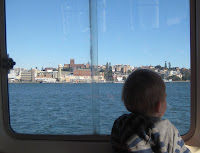 You are one busy lady, Brenda! Am glad you've found more time for blogging and writing, but it doesn't sound as if your schedule has slowed much!
The Iranian election is no surprise is it. unfortunately.

Hope your sax player comes through. that sounds like a fun project.
best, Liz

so good to see you so busy! makes life worthwhile!

Have started a new meme Pet Pride where you can display your or your friends' pets every week beginning every Sunday! Do join in and share your pet pride with the world!

Brenda, thanks for sharing an interesting social and family week with us. I love the idea of your Photo Show for Probus. I look forward to it, especially the verse.

It is strange how the switch from rime to prose is proving difficult to adjust to - my brain wants to turn it into verse which, of course, it couldn't actually do. Just like trying to adjust from reading a traditional novel to one that is 'modern', in the Virginia Woolf sense, I suppose!