WRITER'S BLOCK
It's happened to me in the past......
The ideas hit me thick and fast
When I am walking down the street
Or at the butcher's buying meat
Or giving pots and pans a scour
Or even soaking in the shower!
These are times I would not choose
To receive a visit from my Muse!
Sometimes it happens to me when
I haven't even got a pen,
Or even paper! Not a scrap.
And then my Muse, the poor old chap,
Decides, right there, that he's had enough
And leaves my brain in an awful huff.
Some time later, at my ease,
I'm at the computer saying 'Please!
Please return, beloved Muse!'
And, blow me, if he doesn't refuse!
I find he's given me the slip.
A very awkward relationship.
A thought-recorder's what I need.
And here and now I plant the seed,
Suggesting to technology
That it creates one just for me.
A thought-recorder would be new....
(No! Voice-recorders just wont do;
They're hard to activate I think
When ones hands are deep in the kitchen-sink!)
But the neatest invention of them all
Would be a service called 'Muse-On-Call.'
*
------------------------------------------------------------- 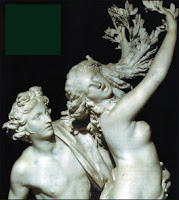 LUST AND LONG WORDS!
Girls are easily misled
By any man with a Greek-God head
And a nose that has an aquiline projection!
At a Bacchanalian feast
They don't mind it in the least
If he turns his head and looks in their direction.
Then they find that they've been fooled,
Common-sense quite over-ruled,
And their passion turns to hatred and to loathing
When his vulpine nature rears!
(I said it would end in tears!)
He was a Wolf* but wearing Greek-God clothing!
*(It suited my purpose better than 'Fox' so don't correct me!)
Posted by Rinkly Rimes at 6:55 AM

LOL, I like the idea of "Muse on Call." Well, you and I both chose the same picture. Oh well, it seemed to fit the theme. C'est la vie. (P.S. I don't see that you ever have Writers Block.)

Yes a muse-on-call would be perfect!! Especially since I can't seem to recall all my wonderful random ideas when I finally get myself at my computer!

Well said...I can call my muse whenever I am stuck for words..if only such invention are made in future :)...
loved the way you rhymed!

I want one! My soul for a muse-on-call. LOL wonderful poem and oh so true. I think the poets are all stalked until we are ready for the stalker!

That first poem is oh, so familiar to any one who writes. Fickle and demanding, the muse! You penned it most eloquently.

A thought recorder... I agree. That would be just the job. I'm sure it's on the way!

You should get a patent on that thought recorder. As for the muse-on-call, please let me know if you find that phone number.

I can so relate to "leaves my brain in an awful huff"! Muse-On-Call would definitely be welcome in my world!

Wonderful! And I could really relate to your Writers Block verse!