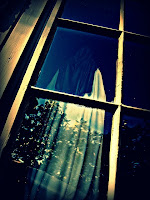 BEHIND THE GLASS
When we climbed out of the mud and stood so tall,
We proved we were the Masters of it all,
The world was ours to do with as we willed,
Our every wild desire would be fulfilled.
The earth displayed itself in glorious greenery
And we were born the jewel of the scenery.
Then came imagination's shining hour!
We suddenly developed the great power
To dream up Gods and Unicorns and Ghosts
And Fairies, Santa Claus and Heavenly Hosts!
These creatures of the mind now dominate us!
They weave their spells so they can inculcate us!
They loom above us, berating and beguiling,
Promising, threatening, snarling, sometimes smiling.
And human beings, born to be achievers,
Are now a snivelling crowd of True Believers!
Break the glass and let the real world in!
Let Nature smother the silly ghost within!
*
Posted by Rinkly Rimes at 11:11 PM

I enjoyed both pieces... great use of the 3WW words in the first one.

Great use of the three words today. Very amusing :)

I loved your Precautionary Tale
I enjoy your website when i visit...will see you next week.

both interesting uses of the prompt great poems.

"Eject" and "impact" together in one 3-word prompt? A gift from the blog gods in the next poem? I think so.

Nice one! Loved your 3WW and Behind the Glass is a belting piece!