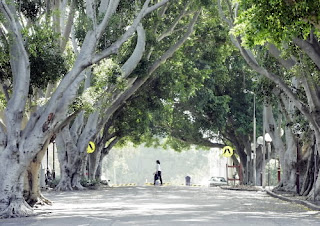 WE WRITE POEMS
http://wewritepoems.wordpress.com
asks us to supply our own prompt.

Forget Syria and World Finance, the saga of the Fig Trees has preoccupied Newcastle for many, many months. In a world consumed by violence and tragedy, our little neck of the woods has been engulfed in recriminations and attacks concerning some 80 year old Moreton Bay Figs, outside the Library and the Art Gallery! (How good to live in a place where this is all we have to worry about!) 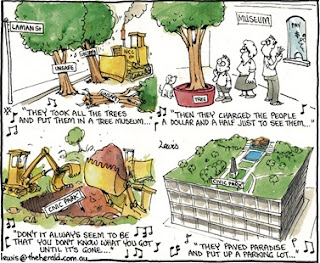 Peter Lewis, our local cartoonist, has captured the angst in many cartoons, but I think this one says it all. 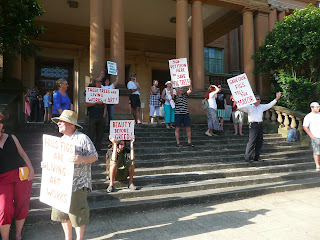 There have been petitions and demonstrations.


Last evening we were told that the demolition would start this-morning. This inspired my poem.


Oh tallsome trees! Thy branches made
A wondrous avenue of shade!
For eighty years thy leaves beguiled
And all the grateful citizens smiled.
On summer days thy shadow spread,
Echoing the greenery overhead,
And fountains played as people strolled,
Saying 'What wonder to behold!'
Thy trunks were sturdy, thy roots were deep!
*
Where once we laughed we now must weep.
Farewell Old Trees! For now you're humbled
And even the mightiest has tumbled.
*
However, I now learn that there have been new developments!
From the local news.
"More than half a dozen people have broken through the barricades and have chained themselves to the trees or climbed the branches.They say they have been threatened by police with pain compliance, where officers would twist their wrists and use pressure points to forcibly remove them.Those who have lined the ends of Laman Street have formed a picket line to stop electrical contractors from entering the site to turn the street's power off, in preparation for the chainsaws.They have turned their vans around and Save Our Figs has been told they will not try to break the picket line.The crowd has turned on Councillor Bob Cook, who was one of the seven councillors who voted for the trees' removal. Newcastle Lord Mayor John Tate has joined the protest, alongside his wife Cathy."
WATCH THIS SPACE!
*
Posted by Rinkly Rimes at 2:17 PM