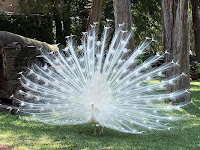 I was in a concert at the Town Hall last evening. It wasn't my favourite sort of venue as I'm happiest when I'm on the same level as the audience and can see faces, but it went down reasonably well. However, I did feel rather out of place as it was a celebration of multi-culturalism, with most performers in colourful costumes, and I felt I was something of a jarring note. There was an excellent guitarist, a choir which sang in many different languages and a group of elegant (if large) belly-dancers.
As well as the groups below. 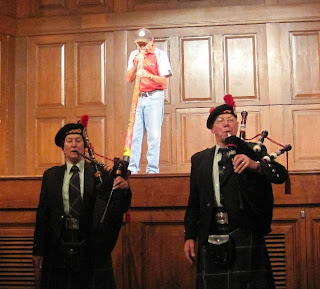 The members of the Pipe Band played along with a didgeridoo player. 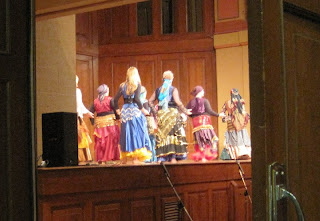 This was a beautifully costumed group I spied through the door as I was waiting to go on. 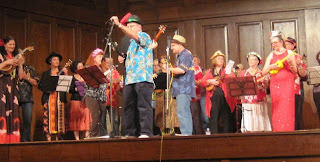 And here is the large Ukulele ensemble having a great strumming time, singing a Maori song.
*
Posted by Rinkly Rimes at 8:32 AM

You're right about the white peacock. It's stunning!
Looks like there was quite a motley crew performing at the Town Hall, Brenda. You probably did an excellent impression of a Dignified Lady. I'm sure no one thought you ought to be in costume.