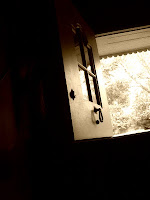 A QUIRK AT WORK!

Oh that quirky DNA!
It works in a peculiar way!
I've always loved to tread the boards
(Though never winning fat awards!)
My two children would rather die
Than act! They say they'd feel too shy.
Yet here's my cousin's daughter, Ruth,
'A chip off the old block'! That's the truth!
Here she's a drunk! (Putting on an act.
We're a sober family; that's a fact!)
Britain's rather too far to go,
Or else I'd have paid to see the show.
Although Ruth's certainly not a daughter
Doesn't it prove blood's thicker than water!
*
Posted by Rinkly Rimes at 10:06 AM

A very nice couple of pieces, Brenda. I really enjoyed the first one. :-)

As always, this poem has your own very unique style...and, of course, humor.

Was a touching poem magpie..enjoyed reading the two poems!

You always rhyme, that is your style and you are SO GOOD at it, Brenda!

Enjoyed your Magpie.. an engaging poem..

Brilliant take on the prompt.

Some great work there Brenda, I really enjoyed the two pieces...

Absolutely terrific - a great gift and surely the DNA wins...

Being that I am a little DNA challenged myself, I enjoyed the second one a lot. The first was precious and so peaceful. Lovely writing.

You gave us the sad and happy sides of the same coin -life!

Beautiful, Brenda.
I have to give some thought to trying this Magpie idea, because I haven't been able to write for months, even though so much has happened.

Dear Brenda: "Bon voyage" a very poignant poem about a man's found memories of the joys of home. Very touching! "A Quirk At Work" was winsome fun! Enjoy the acting bug too. Did never hear that term "tread the boards"! Is that similar to "walking the plank"? It would depend on how many butterflies in the stomach brought about by stagefright, I suppose! Great imagination and fun!

loved both- especially the first! That's what I imagine happens.

Tis so hard to rhyme
in time,

Beauty... excitement... peace... through such a difficult time.

Interesting take - both so unique -- the first gave me chills reading it, one can almost image that may be the way it is. a nice thought anyway to be greeted by light love and freedom, that gives the mind peace.

the second, save the money and have them send you a video tape instead..