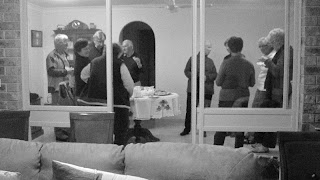 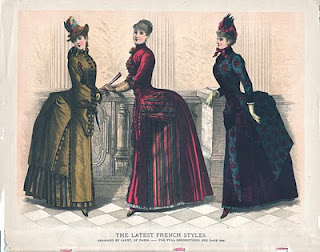 Don't be fooled by these gorgeous bustles!
Underneath the silk that rustles
In colourful swathes of red or beige
There's a horrible sort of metal cage
That keeps their rear-ends nicely rounded
And causes us to be dumbfounded.
Imagine! When one longs to settle
On a seat, a piece of metal
Pierces one's dainty derriere
And causes one to wince and swear!
But did they swear in those long-lost days?
Did they even know any fruity phrase?
Or did they merely smile sedately,
Still so ladylike, sweet and stately?
I bet they carried on a treat
When at last their outing was complete.
And when they reached some private place
They actually let themselves grimace!
When they'd stripped-off camisoles,
Corseting and folderoles;
When the flesh was on display
In a quite abandoned way,
Surely they had to scratch like mad!
And think of all the scars they had!
Where whalebones pressed they were all dented
And it couldn't be prevented!
In the park they looked so neat,
Straight-backed, elegant, and sweet.
Yet underneath chaos was reigning!
And not one lady was complaining!
It seems the men were all deceived!
'Seeing' could not be 'believed'!
When female bodies were revealed
And nothing any more concealed,
Did they look hang-dog and gape
Saying
'I preferred the other shape!'
*
Posted by Rinkly Rimes at 6:35 AM

I like the candid peep into the tea and chat.

Tea and chat seems to be a regular Australian past time, perhaps more than in the UK now? So there is a
sort of 'other world' about the shot - very reminiscent!

beautiful explorations of invisibility.
it sounds like a dream of course.

Brenad,
I just loved your poem about Invisibility.

That is what the wine is there for; to compensate for your invisibility.

If you don't drink it you are likely to leave and disappoint Dionysus.

As a lover of rhyme myself I so enjoyed your poems... both adorable. The first I could so relate to, comes with aging and weight I suppose. The second packed with humour, ouch indeed...love them! Thanks for sharing!

love both of these... hooray to you!

Loved them both! I can identify with the first. The second gave me a different look at the beauty of the dresses. How miserable they must have been! Great writing as always!

i really liked this one... especially the first part... the world will always go on, it stops for none

dropping by from SS :)

I liked both the poems. It always hurts to know that we are not being missed.
"Ouch" made me say ouch! To think of the fact that women wore cages underneath their clothes that day in the name of modesty. OUTRAGEOUS. I have read about Victorian fashion rather vaguely in history but your poem brought out the anger and the pain that a woman experienced in those times, when she wasn't free to express herself. This is a universal sentiment so true even now.

Oh Brenda, I can understand the feeling. I have written a similar poem although it signifies something else...

I identify with that feeling but I liked the last line the best :) and probably would do the same!! LOL!! you do become anon if you don't make enough noise at a gathering ;)