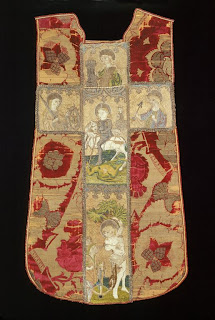 ORPHREY NICE!
Centuries old, this chasuble displays an orphrey cross.
The meaning wasn't clear at first; I was really at a loss.
But now I know that orphrey is religious decoration
It's embroidery of a certain type, as in the illustration.
Think of the Parish women, working night and day
To make sure that the local Priest was dressed a certain way!
Think of the gold and silver, and all that warp and weft!
Think of the needles flashing; those old hands swift and deft!
What was the purpose of it ? I think I understand......
Expensive ornamentation made the cleric appear more grand.
Was it all 'For the Glory of God' or for something far, far less,
Something nearer humanity.....something far from holiness?
I speak of self-aggrandisemen. I speak of human pride.
I speak of human-nature, which cannot be denied.
No doubt the Church gave rise to beauty which we cherish now;
Glorious Cathedrals..... that I will allow.
But I think of the embroiderers, the stone-masons, the poor,
Who had such lives of poverty, and brevity, what's more.
Read the description which follows...... the lavishness will amaze!
And ask yourself, when you've read it 'Were they really
The Good Old Days?'
*
Description of the above work.
"Orphrey Cross: linen, plain weave; embroidered with silk floss and gilt- and-silvered-animal-substrate-wrapped linen in bullion, outline, satin, and split stitches; laid work, couching and padded couching; orphrey braid: silk and silver-gilt strip wound around silk fiber core, plain weave, open work with weft deviations; fringe: silk and gold-gilt-strip wound around silk fiber core, warp-faced plain weave with extended ground weft and supplementary patterning weft uncut fringe off one edge."
*
-----------------------------------------------------------------------


I'm glad I'm not a Pollywog!
A tadpole's insecure
From day to day
It can never say
How it's going to look, for sure.

It starts off as a roundish blob,
But then it grows a tail!
When it looks around
The tail is found
And it says 'Wow! I'm a whale!'

Very soon two arms are sprouting.
He's amazed by what he's seeing!
He holds them there
Up in the air
Shouting 'I'm a human being!'

But the two legs prove that that's not right
And he sees them sprout, brand new,
Double-jointed, long
And very strong'
So he says 'I'm a kangaroo!'

But the worst is yet to happen!
His tail begins to itch,
Then it starts to ache
And finally break
And he leaves it in a ditch.

Feeling really puzzled,
He climbs up on a log.
Then he starts to croak
And sees the joke;
'I get it! I'm a frog!'
*
Posted by Rinkly Rimes at 6:55 AM

Yes, Brenda, I've often thought of the people whose labor provided the pyramids, the castles, the cathedrals, the ophrey chasubles, all for the benefit of someone other than themselves.
If they thought it was for the glory of their god, they may have been satisfied in their suffering, but it doesn't mean they didn't suffer.
The tadpole, on the other hand, lives to see the error of his imaginings and can only hope a princess comes out of one of those castles to kiss him.

I don't believe there ever "good ole' days"! It's entirely personal - for some life is grand, for others a lot of suffering, for most of us, some of each, regardless of our social status or wealth. But you are so right, the rich-poor divide has always been there. A very informative and thought-provoking piece on the Orphrey. The pollywog poem is so much fun and reminds me of the quote on my blog:
"So little yet so much one knows
Like a frog which grows in a
puddle
Knowing not oceans so ever vast
Becomes befuddled by its small
...world."
Classic Thai poetry translated Seni Pramoj

Thought provoking for sure! I don't know if I prefer those days over now, but life was simpler then than now. And, simpler is good.
I imagine that the embroiders felt a sense of pride and accomplishment whenever that garment was worn. I know I would had I been a part of that creative process.

I have never heard the term orphrey. Very informative!
Loved both your poems - for very different reasons!