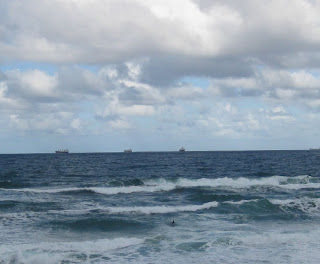 http://skyley.blogspot.com/
THE ELEMENTS
Tumbling waves and churning clouds vying with each other
Ships sailing steadily, slowly passing through.
A lonely surfer pits his strength against the boiling elements,
Rejoicing to be elemental too. 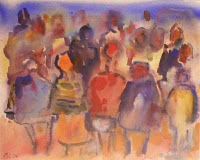 As I sat drinking iced coffee I watched the passers-by,
With a critical and, shall we say, a sharp sardonic eye.
Malcolm was stuck in a man-style shop, seeking a 'crimping' tool,
And he takes his time about such things, I can tell you, as a rule!
So I thought I'd play a private game, related to 'I Spy.'
As I watched the throng of variegated people passing by.
'Would I swap with you....or you....or you....or you?' I pondered,
As they scuttled, drifted, hung-around or just, without aim, wandered.
Here was one so old and bent by comparison I felt youthful!
And here was one all angular; I like 'plump', to be truthful!
Here was one weighed down with cares, her mouth a downward arc.
Here was one who probably earned her living after dark!
Here was a schoolgirl, blithe and gay, with all her life before her;
With all those examinations; I was certain they would bore her.
Here was a mother and screaming kids! I couldn't live that again!
And here was a suffering creature, hobbling in great pain.
I'm an ordinary woman, approaching the end of life;
An ordinary mother and an ordinary wife.
And I sometimes feel downhearted when I think I've been deceived,
Reaching this stage and finding very little's been achieved.
But a little self-analysis works wonders, I have found.
So, if you ever get the blues, simply look around.
*
Posted by Rinkly Rimes at 6:17 AM

I saw the three ships coming sailing in but didn't see the surfer until I enlarged the photo. He (or she) must be absolutely crackers out in that. It looks every bit as awful as the North Sea in the middle of winter.

A lovely ocean/sky shot!
Love your poetry as usual!

That's quite the stormy seas! The surfer is really small amidst all that churning water. Nice dramatic sky really adds to the whole scene...

Great shot, the sea looks so stormy, that surfer is brave to be out in that surf.

I didn't see the surfer until I read 'The Elements'-how wonderful!
And what a terrific image - I love that sky!