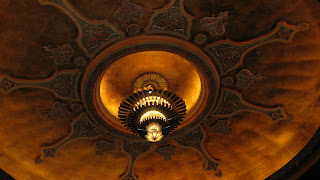 MELLOW YELLOW MONDAY
http://mellowyellowmonday.blogspot.com/
GOLDEN CEILING
'No photography!' came the call in the theatre one night!
But I'd already clicked this shot, so I was quite all right.
*
This ceiling, at The Civic has a little tale to tell,
For it isn't the original, although it mimics well.
The decoration first placed there ninety years ago
Was admired by everyone who came to watch a show.
An example of Art Deco, it was put away in store
When a Japanese invasion threatened in the War.
After the War when everything was chosen for repair,
The lovely Art Deco ceiling simply wasn't there!
And, to this day, nobody knows exactly where it went!
So in due course a replica was made to represent
The artistry of a bygone age on which disaster fell.
And looking up at it I felt it's done it's job quite well.
*
-------------------------------------------------------------

I once wrote a childrens' musical play called 'Cicada Circus'. In it the children dressed as well-known Australian cicadas and formed a circus on-stage. Here is one of the 'characters'.

Loud bangs frighten babies!
Well, they never frightened me!
And I loved to hear a thunder-storm
When I was two or three!
I liked to hear the saucepan lids
When they were clashed together.
I liked to hear the front door slam
When there was windy weather.
I liked to hide beneath my bed
And jump out shouting Boo!
And when my Dad bought me a drum
I yelled and screamed for two!
I've heard the loudest sounds there are
And never even cried!
But I've never heard a canon roar
From way down deep INSIDE!
Please put me in a canon
And shoot me in the air!
The noise will make the people scream
But I'm certain I wont care.
The audience will love it,
Though they cover up their ears
And, as for me, I'll be so thrilled
When I hear them give Three Cheers!
*
Posted by Rinkly Rimes at 7:34 AM

I love the intricate design and also the color. Happy Monday!
MYM-More flowers

I guess someone who was involved in the hiding, also admired the art deco!